What’s On My Desk Wednesday 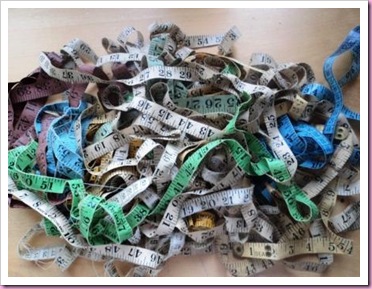 Treasure ……… rescued from the bin …… lots and lots of old, worn tape measures …… aint got a clue to do with them ….. but sewing them together springs to mind …. all suggestions welcome!
Posted by Its All Fiddle Fart at Wednesday, December 22, 2010 11 comments:

Snow Bubbles For My Festive Bathroom!

It’s a large bottle of white foam bath (80p Morrison's) that I have covered with printed images on A4 paper, using a design set called Little Joys by Zoe Pearn http://sweetshoppedesigns.com/sweetshoppe/product.php?productid=16188&cat=0&page=3.  I have printed a background paper and snowman which I have cut out and stuck down then varnished over it with Modge Podge Sparkle (if I were to do it again I think I would prefer to use a mat finish). 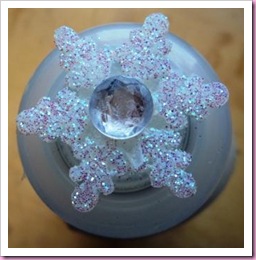 In between coats of Modge Podge I have added self adhesive letters and punched snowflakes, and then coated over them again.  When dry, I have added small buttons and eyes to the snowman and blue flat backed gems to the snowflakes.
I have used about six coats of Modge Podge in the hope of keeping the bottle fairly bathroom proof …. it will be interesting to see how long it stays in relatively good nick!
I’ve added a plastic snowflake and flat backed gem to the cap with strong epoxy glue.
Posted by Its All Fiddle Fart at Wednesday, December 22, 2010 3 comments: