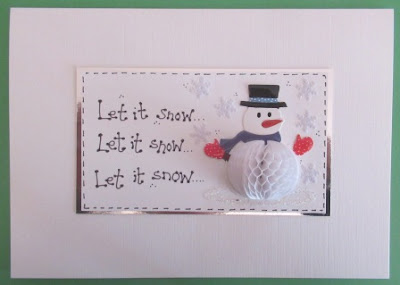 Woo hoo hoo, I finally thought of an idea to use the honeycomb snowmen embellishments  I found in The Works last year.  I ermed and ahhhed over them for such a long time when I first saw them and left it a while before making a considered purchase, but when they eventually came down to 2 for 1, they were a no brainer, even it it's taken me a year to think how to use them. 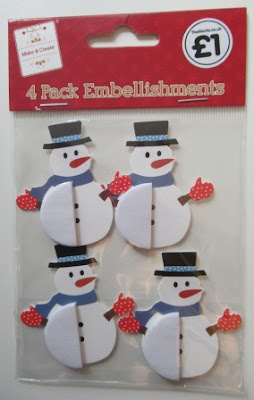 I started by handwriting the centre panel using one of my trusty black fine liner pens, first the letters, followed by the dots, then the faux stitching, before finally mat and layering them on silver mirror card.

My best buy so far this year, for my Christmas crafting, has been this snowflake confetti from Hobbycraft, I can see this bag being empty by December. The size is just in perfect proportion for my cards etc.  £1 for 15g.  https://www.hobbycraft.co.uk/white-snowflake-confetti-15g/643847-1000 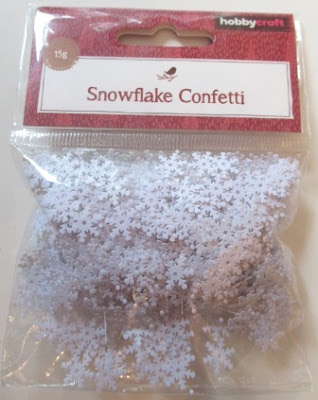 All I had to do then was add the snowman before giving him some small, black dome sticker eyes and a little Ranger Glossy Accents on his hat, nose, scarf and gloves.  I find that just adding a layer of Accents gives flat and inexpensive embellishments just that extra touch of class. 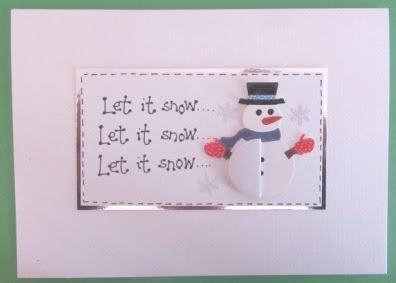 The final bit of froo froo included adding three snowflakes (as above) and a sprinkle of glitter round the bottom of the snowman.

Naturally, I will send the card flat, but all the recipient has to do is peel off the tag and fold over to reveal the self adhesive honeycomb middle (sounds like a Malteser!)

Most of the cards I will be posting this year will be one offs, probably not to be repeated again, but I love this card so much I have made another half a dozen or so, but keeping a spare pack aside, just in case inspiration strikes again.
Posted by Its All Fiddle Fart at Monday, September 02, 2019 3 comments: