Posted by Its All Fiddle Fart at Monday, February 20, 2017 No comments: 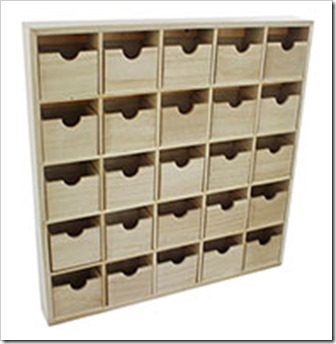 They measure 35.5cm x 35.5cm, which is very generous, but the depth isn’t given.  I haven’t seen one in the flesh, but I am thinking, with 25 drawers they would make a brilliant Advent Calendar. I was also thinking that three would fit very nicely and look quite good along the top of the drawer unit in my guest room, filled with various craft bits and pieces.   http://www.theworks.co.uk/p/craft-sets/2-x-25-drawer-cabinets/kit05902 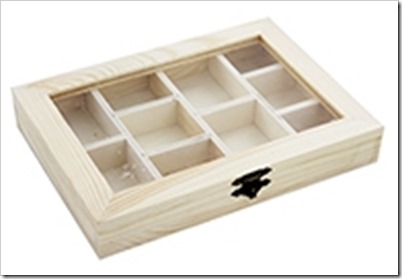 This cabinet box has potential too, especially if stood upright. It has 10 compartments that could stage various Christmas scenes, I already have several Christmas bits and pieces that are too big for my usual projects but would be perfect for this.  It measures 15 x 20.5 x 3cm and at £2.50, it’s worth an experiment or two??? http://www.theworks.co.uk/p/craft-storage/wooden-compartment-box/5052089193185 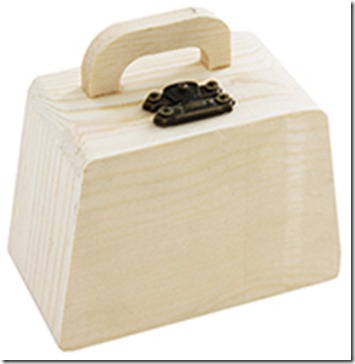 And …. they don’t have this in the Evesham branch but who could resist ordering this little wooden suitcase for just £1.00? It measures 10 x 8 x 4cm. I am thinking it would make a very cute holiday memory box …… with a zig zag scrapbook book attached to the inside and the outside possibly decorated with shells, stickers and photos from the holiday. Again for £1 it’s worth a pop. http://www.theworks.co.uk/p/craft-storage/mini-wooden-suitcase/5052089192812

I use The Works an awful lot now that I have moved to Evesham, if the shop doesn’t have something I want in stock I just order it online and then collect it a couple of days later, so no P & P. When I collect anything, I usually get a discount on buts and pieces I might happen to buy at the same time.  I have a loyalty card where reward points are added whenever I spend anything, so I get a little discount here and there when I claim those points, so it’s win win all round.  ………and now they have a Craft Club, so joining it is a no brainer too. It’s worth a look.
Posted by Its All Fiddle Fart at Monday, February 20, 2017 2 comments:

For this and several following posts poor Iris has had to sacrifice one of her boxes of picture dominoes …….. and my ability to make something and then leave it well alone until it is really set has been sorely tested. 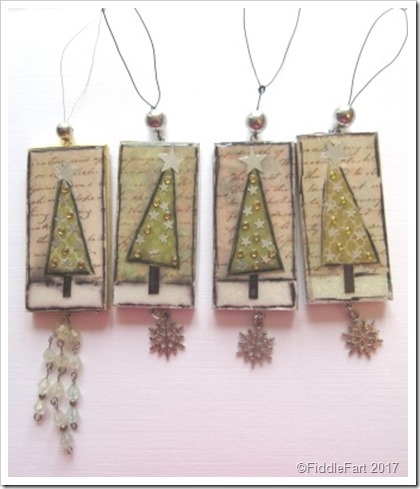 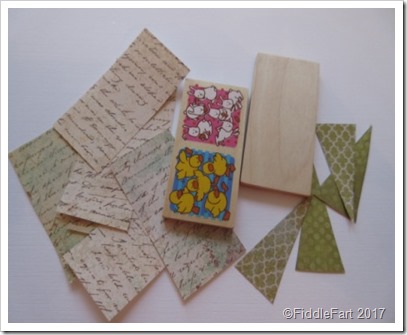 For this project I decided to decorate both sides of the dominoes identically with scraps of a handwriting print paper, a strip of white glitter paper (snow) along the bottom ……… 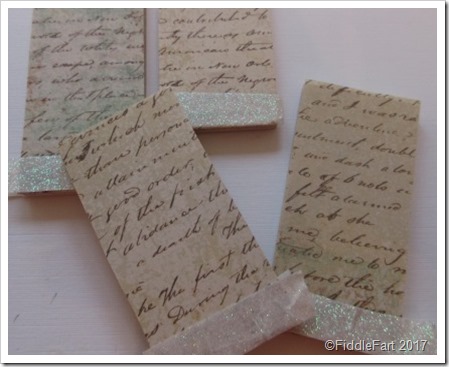 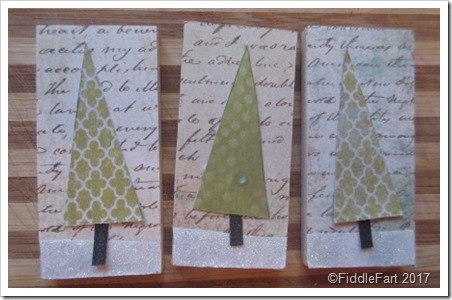 …. adding tiny silver stars and yellow/gold flat back gems. I decided to empathise the trees and domino edges using a black, fine liner pen, knowing that it would run slightly when covered with gel, which I thought would add to the handmade feel. 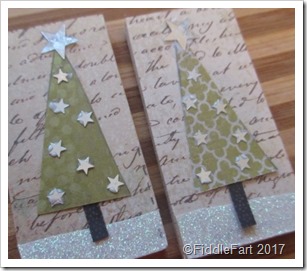 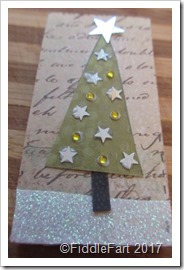 I covered the completed scene with Aleene’s Jewellery Pendant Gel, and that was where my patience was well truly tested, as I knew from past experience that I shouldn’t touch them for at least 24 hours, no matter how tempted. 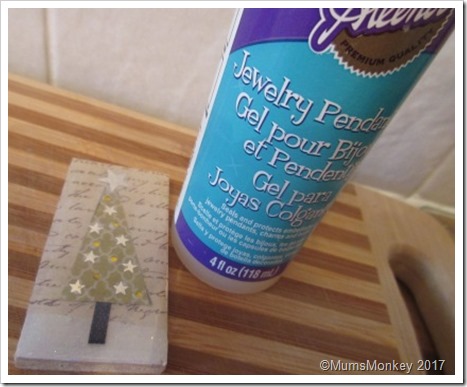 I like using Aleene's because of the economical size of the bottle and the fact that the pendant gel is quite thick and not too prone to running. As I was running low and anticipated that I would use more in the next few months, I tried to buy another couple of bottles, but to no avail, I can’t find it anywhere in UK, not even on Amazon, where I think I originally bought this bottle. Instead I have ordered Ranger Glossy Accents. I used to use Anita’s 3D gloss an awful lot, but when they changed the bottle to a smaller tube type container I never quite managed to master the application and so became disenchanted with the product.

When I was absolutely sure the gel was set and hardened, I turned the domino over and repeated the gel application again. However, if I was making tags, I would just  leave the back blank so that a greeting could be added. 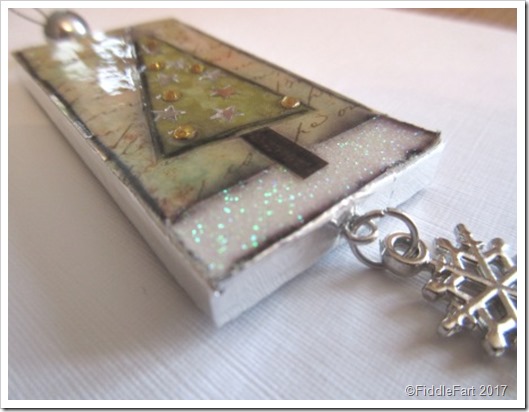 With both sides of the decoration set, I then used adhesive silver Inkssentials Memory Foil (tape) to cover the sides, burnishing them with my crease mouse, so it was smooth.  Sadly, wanting more tape for future projects, again I cannot find it anywhere in the UK! I am not sure, but I wonder if it has been discontinued?  It took me several hours and texts to Marc before finally finding something similar on e-bay which is 6mm wide, I am just hoping it will be OK, so fingers very tightly crossed. 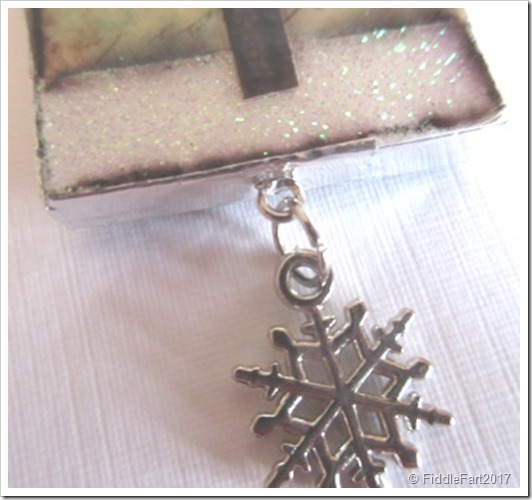 I screwed a tiny, silver eye hook in the top and bottom of the domino. On the top I used black jewellery wire and bead to make a hanger, and on the bottom I added either a silver snowflake charm or cluster of beads. 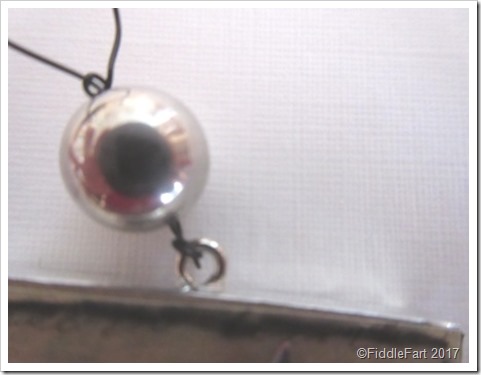 I think when I make these again for presents, I may not add the black outlines, as I think it would give the tags/decorations a subtler, softer look, I also think that less is more, I need keep to using just one dangling snowflake and ditch the cluster of beads as they look heavy and add too much fiddle fart, so that the simplicity is lost.
Posted by Its All Fiddle Fart at Monday, February 20, 2017 2 comments: