You may remember a little while ago me telling you that I had been approached by Wayfair UK to produce a “crafty” tutorial using some of their products.......  http://itsallfiddlefart.blogspot.co.uk/2014/11/wayfair-uk.html 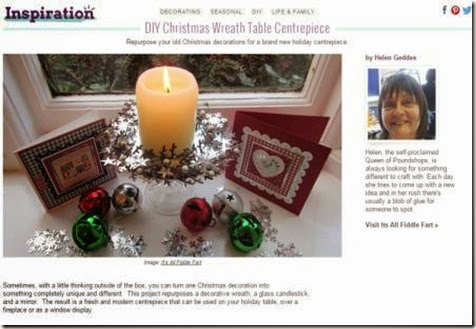 As I said then, I was a little apprehensive at first, explaining that my usual “stamping ground” for finding bits and pieces for upcyling projects were mainly charity or Poundshops, but in the end I was eventually cajoled into producing a little something……….
http://www.wayfair.co.uk/Inspiration/DIY-Christmas-Wreath-Table-Centrepiece-E6233
Putting the instructions together for the tutorials wasn’t too hard, it was just like a blog post but by numbers, however I really struggled with the photos, not only having to match them up to a strict template, but also in the staging, something I have never done before.  When I blog a project it’s a matter of getting up as close as I can on a plain background, no fuss, no frills, no background, but as you’ll see, if you pop over to the "Inspiration" section of Wayfair's website I really had to dress things up!  So a lot of lessons learned and next time I am staying in London with Marc, I need to get his partner Iain to take me in hand and show me just how to stage like an expert!!!

Anyway ........  it was a very new venture and a steep learning curve, but it was also such a great thrill to be spotted and asked ...... and there's another tutorial to come on 16th December!
Posted by Its All Fiddle Fart at Wednesday, December 10, 2014 5 comments:

I am sooooooo into bottle caps and pendant trays at the moment, these are not quite finished yet, they need a jump ring and thread with a bead on to complete them, but you’ll get the gist.

I am now constantly on the look out for small, dimensional  embellishments that will fit into a bottle cap, and these skating Jolees penguins are a perfect fit ……. 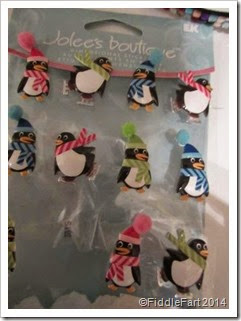 …….. bringing back very happy memories of my wonderful trip to Michaels in Las Vegas, which is where I bought them.
Posted by Its All Fiddle Fart at Wednesday, December 10, 2014 4 comments: