Over The Top 21st Birthday Card

This card is A5 in size and is made using white linen effect card
Oh good grief, you can tell I am a bit rusty!! I can’t believe that I have even forgotten my sacred rule of card making that less is more!!  Ye Gods!! 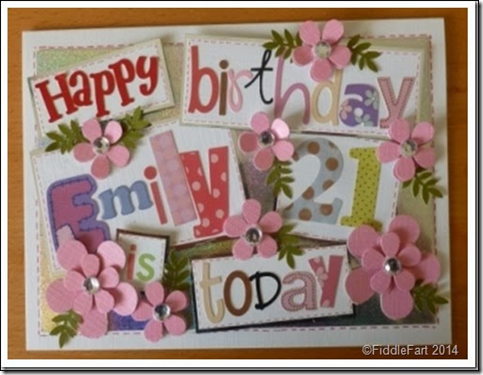 This is the card I made for my niece’s 21st birthday, I think I was panicking because time was short and I needed to get it done …… but then went completely overboard, there’s too many fonts, and far too many random colours and patterns …. and you can’t see the hologram silver background clearly in this picture, thank goodness.  My apologies for my assault on your card making sensibilities …… there is no excuse for my putting everything but the kitchen sink on a card!!! Major mojo overload!!!
Posted by Its All Fiddle Fart at Monday, July 28, 2014 6 comments:

On my desk there is a small pile of Christmas cards I have received that I have kept as a source of inspiration for ideas ….. 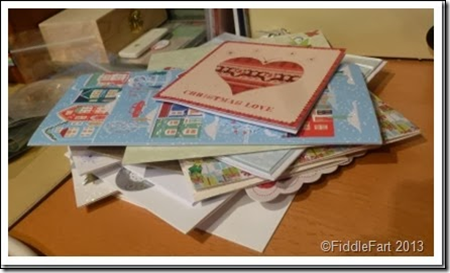 I kept the cards below as I don’t think I use stockings enough in my cards,  but they can be very useful when you need to make a really quick card.  Then, as fortune would have it, I found a random pack of six 3D stockings while mooching in my drawers and I thought ……. hmmmmm, the proof of the pudding ….. 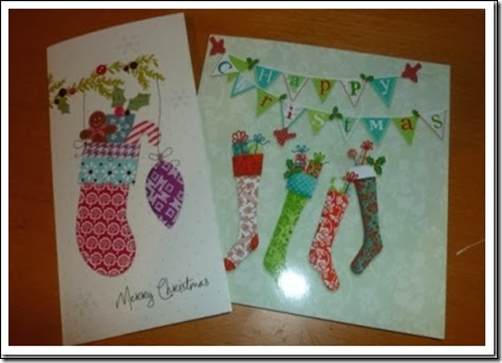 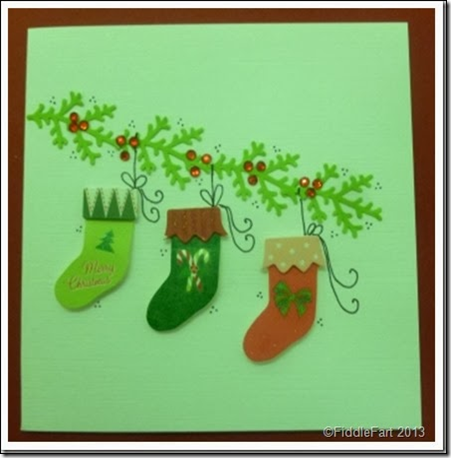 I then used an old punch (sorry, I don’t know the make) to punch out shapes which when joined together made a fir swag. …… from which I hung the stockings with a little doodling. 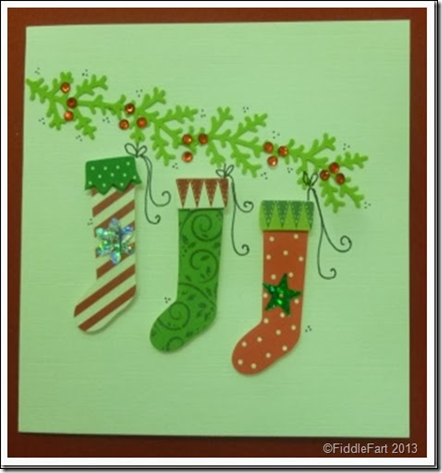 All I then needed to do was add a few clusters of red flat back gems for a little extra dimension and bling!  So simple and made in, I would say, less than ten minutes!
Posted by Its All Fiddle Fart at Monday, July 21, 2014 4 comments:

Each of these white or red card hand cut card blanks measure 5ins x 5ins and use either a linen effect or plain textured cardstock. 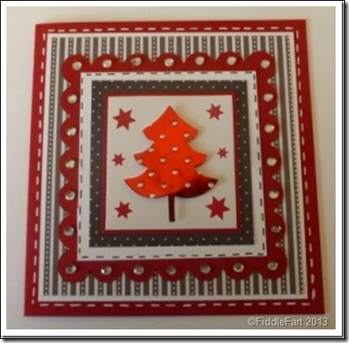 The toppers are made using the  Christmas Tree design from a pack of red foil gift tags (below), with the backs cut off and papers from the 6” x 6” Christmas paper pack from Wilkinsons Christmas 2013 range which I am praying they repeat with something similar this year. 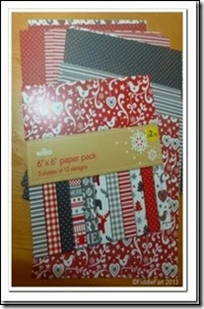 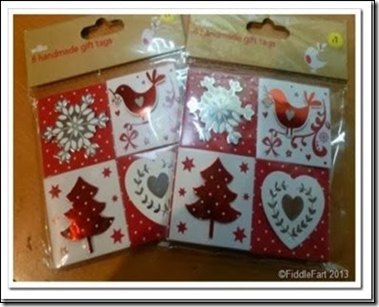 I’ve also added red and clear flat back gems on the tree and scalloped edges of the Spellbinder die cut square, plus a touch of faux stitching around some of the edges. 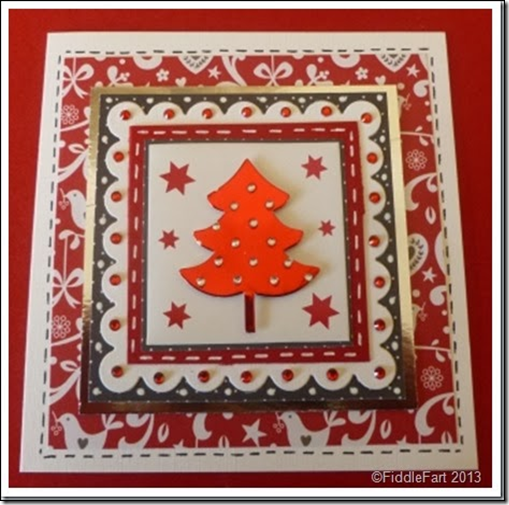 There’s a lot of mat and layering going on, but I have been mindful, no matter how tempting, not to use any foam pads for extra dimension because if posted they may not fit through the post office gauge, and so cost extra to post 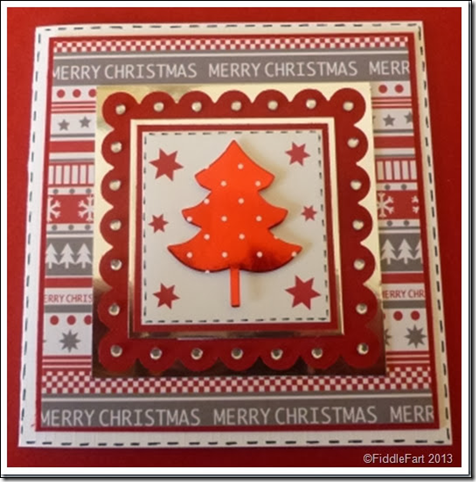 I’ve had these Ikea Moppe drawers for years and years and not done a thing with them except for filling them with my pens and dimensional paints ….. 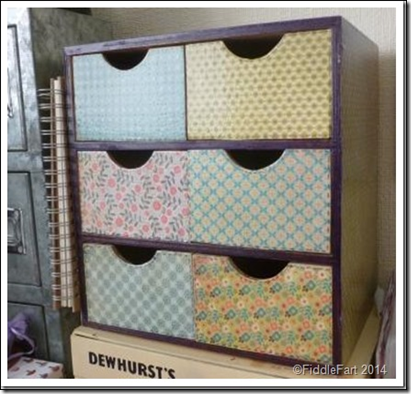 …… until I thought that they would be a perfect foil for my My Mind’s Eye Stella and Rose 12 x 12 paper pad, as they were looking a bit grubby …. 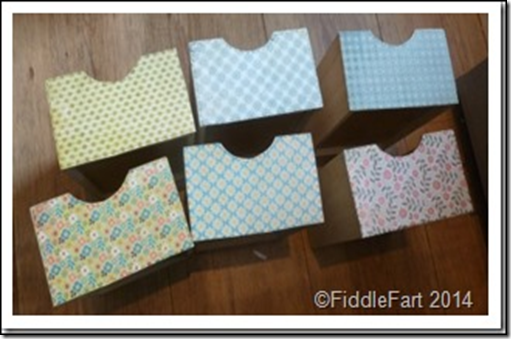 …… so templates were duly made and drawers fronts and box sides duly covered ….. and you will no doubt notice that I couldn’t resist doing some faux stitching round the drawer edges. 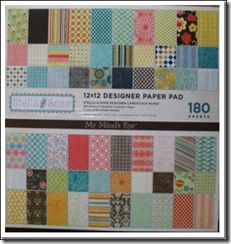 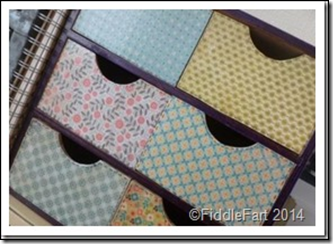 …… I also coloured the box frame edges with a Promarker pen. I reckon all of this took me no longer than an hour, if that …… 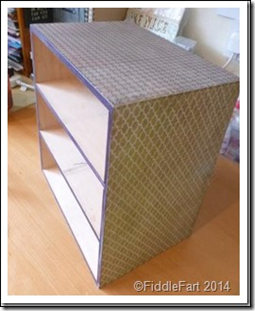 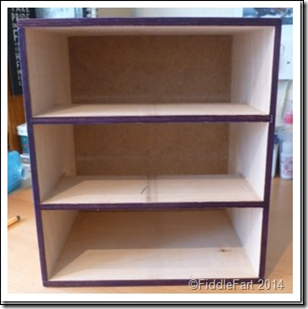 ……. the laborious part was the varnishing, for which I used Wilkinson’s clear, quick drying varnish, which really does dry quickly between coats, it’s just that I am very impatient!!
I then did a bit of Googling for Ikea Moppe drawers and found this project for an apothecary chest  with the drawers turned round ……. http://magpiejaybirdandmew.wordpress.com/2012/08/24/diy-apothecary-box/ 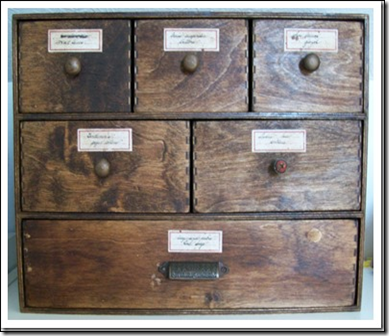 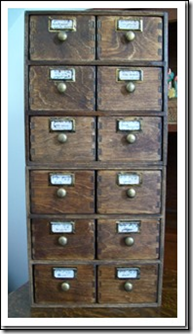 I just love apothecary drawers, but never in this world would be able to afford an original set ….. but this has certainly given me food of thought as I want something different to go in my lounge fireplace …… 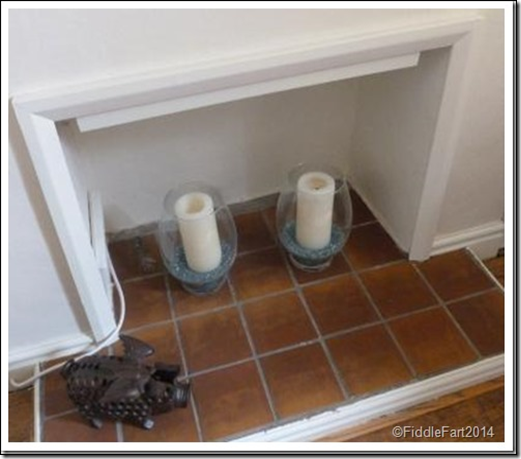 World Exclusive News - A Baby Pic And Marc’s Coming To Stay With Me!!!

I was in such a hurry to get a post written yesterday that I didn’t have time for to introduce you to Iris …… my very, very beautiful granddaughter, not only has she inherited the gift of great beauty and intelligence …… but she can also poo for England, that’s my girl!!!! 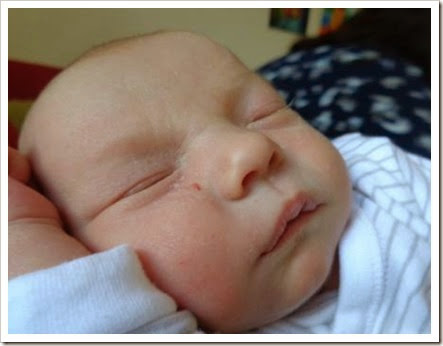 And my other exclusive news??????  Well, Marc is coming to stay with me for nine whole days in the summer, he has finally been lured from London by the pleasures and bright lights of Wolverhampton!!  I don’t know who is the most excited, me or him!
I am going to treat this special visit as my holiday too and see Wolverhampton and my humble village through the eyes of an international tourist!  Can you believe Marc, a man who has travelled the world in showbiz style, is almost totally overwhelmed by the thought of being able to go into town on the village Banga bus with me! 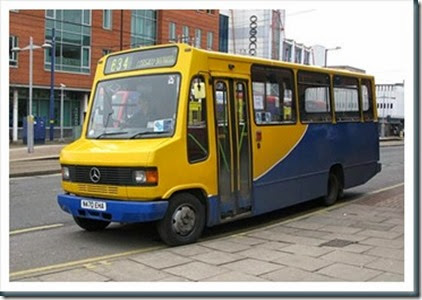 I have so much planned …… we are going on shopping extravaganza to the only Tesco Express in the village, a cream tea at our new village cafe and a fry up in the greasy spoon ….. followed by a plate painting session in the next village, as well as “doing” all the charity shops in town, visits to Bridgnorth, Shrewsbury and Birmingham and a bumper trip to Bentley Bridge, a local retail park to “do” HobbyCraft, Home Bargains and BM Bargains! I know how to give a boy a good time!!!!!!!
On the days we decide to just stay at home to give Marc a bit of a rest from this mad, hectic social whirl we are hoping to put some projects together for the blog, hopefully using items purchased from said HobbyCraft, Home Bargains and BM Bargains …. I know Marc is counting the days ….. and I might burst …… the keys of Wolverhampton are about to become Marc’s!!
Posted by Its All Fiddle Fart at Wednesday, July 02, 2014 11 comments:

Thank You …… Lost Photos ….. And Other Developments ….

What a to do!  Thank you sooooooooo much for all your help and advice and e-mails re: my lost photos!!
I shall attempt to explain the problem ….. I use Livewriter to create a blog post because it is much easier to manipulate pictures and text than Blogger.  When a post is complete I then send it “magically” to either one of my blogs to said Blogger, where, more or  less all I need to do is schedule a date for the post to be published.
But connected to the Livewriter programme is Picasa where all the pictures I have used are stored.  I don’t often look at Picasa, and goodness knows what made me look on Sunday, but when I saw I had albums containing 1000’s of old pictures I decided to have a “clean up” ….. not realising how everything was intrinsically linked! Not “only” did I delete two albums into the Trash Can, but despite the warning I also then went on to empty the Trash Can and that is when they all disappeared for good!!!!
I have never backed up my blog pictures ….. there are so many, once a story or project is over I don’t really need them, and like I said there were/are thousands of them after 5 years of writing two blogs.
I think I can salvage “Mums Monkey” in time, from what I can see I have lost six months of photos …… I can do this by retrieving the blog posts one at a time from Blogger, because, goodness knows why/how, the pictures, though they don’t appear in Blogger in any shape or form, still exist in Livewriter when retrieved, if that makes sense.  So by copying the pictures and then saving them again as a jpeg I can reinsert them back into the post …. and as before, return it to Blogger, talk about a Fiddle Fart!  However, I am a little mystified by the fact that few odd pictures remain, but never mind.
As I said, I think I may be able to do this very slowly for “The Boys”, but I think too much has been lost with Fiddle Fart ……. when I looked yesterday, there are pages and pages and pages without pictures …….. and that is my conundrum …… I think the days of Fiddle Fart were drawing nigh …. I craft so little these days …… and life, once more, if changing big time for me ….. not only do I have the most wonderful baby granddaughter Iris Amelia Geddes, who arrived on 20th June, and will be taking up an awful lot of weekends from now on ……….
BUT, redundancy has reared it’s ugly head at the school where I work, and I have “opted” to take voluntary redundancy ….. although with less than three weeks left before the end of term this has yet to be confirmed!  My old job no longer fits the new structure, and although there were jobs that were “ring fenced”, without going into too much detail, most jobs have been down graded, hours cut and responsibilities added to …….. so I have decided, foolishly or otherwise, to jump ship and not apply for any of the new positions.
I have rambled on enough for one day  …… but I have more to add, so I will “divulge” again tomorrow
Posted by Its All Fiddle Fart at Tuesday, July 01, 2014 6 comments: