At last, I have been happy enough with my Christmas snowman diorama design to go into mass production and I have finally have a whole batch of finished ones sitting on my craft table. 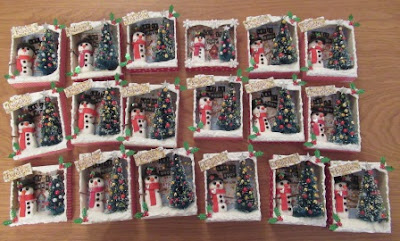 How many I could actually make was all reliant on how many frames I could wrestle from the compartment trays I already had (originally manufactured as boxes for wooden embellishments). 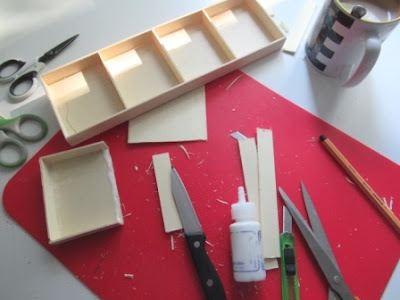 In the end I managed to get sixteen because instead of throwing away the frames that didn't have any sides when the boxes were carved up, I cut new ones from the scraps and carefully glued and taped them together to create a new complete frame ........ 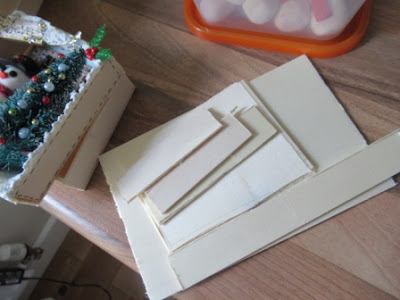 ..... with the intention of using decorative fabric tape, when the time came, to cover any/all the imperfections from all that butchering .......... I was so chuffed! 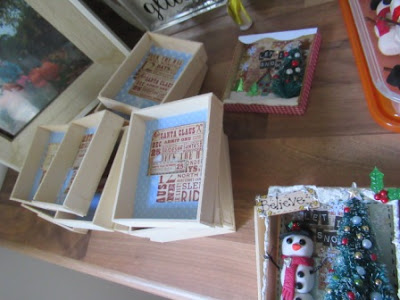 The frames were then lined with a small print blue paper and scraps from a printed Christmas ticket design that were in perfect proportion to the diorama embellishments. 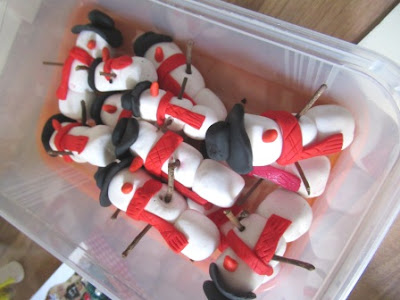 The snowmen were then made en-masse, with each taking about a quarter of a pack of soft white Fimo to make.  Hats, scarfs and carrot noses were made using scraps of Fimo I already had.  The real twig arms were added to the snowmen before the baking process. 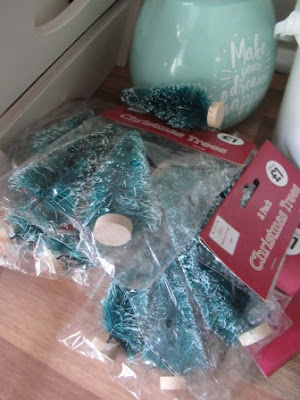 The 10cm Christmas trees (The Works) were not, how shall I say, the bushiest and most were a little squashed and flat in places, however this sort of worked to my advantage as I didn't have to trim them, by finding their flattest angle and fluffing the rest up, they fit pretty easily into the frame, after removing their base and plunging the bare wire, with a little glue into Air Magic Soft Modelling Dough and then left to dry. 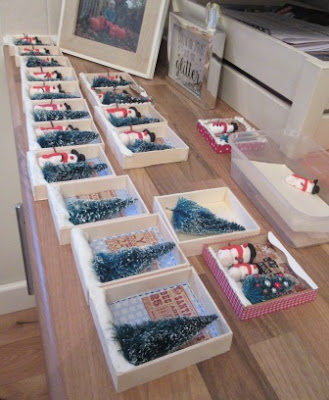 Now came the fiddly farty stage when all the flat back pearls had to be attached to the trees with great dollops of PVA glue, thank goodness it dries clear .......

...... and the Dymo tape "Let It Snow" sentiments added.  I wanted to put them in between the tree and the snowman, which was easier to do before gluing the snowman in permanently and I wanted to add small snowflake confetti (Hobbycraft) and tiny gold stars to the background as well, at the same time.  By the time I had finished I was almost crossed eyed. 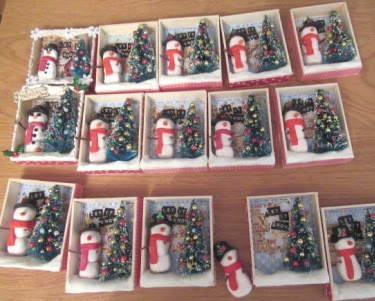 My best buy so far this Christmas was buying a tiny £1 holly punch from Hobbycraft making decorating the snowmen's hats so much easier than my first attempts! 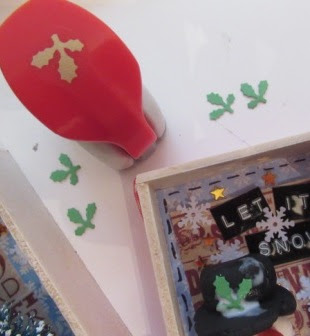 With that, snowmen were finally glued into position and when I admit to starting to feel frustrated, as it seemed every stage needed time to dry before I could move on.

The "pelmets" for the snow had to be added ...... so while they dried I made the corner "believe" signs using the left over bits from the original trays, writing using a black biro so that the ink didn't bleed into the wood. 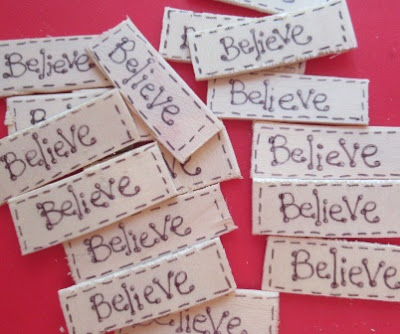 When the pelmets were dry I decided to touch up the snow and snowmen up with a little white paint as the snow, through handling wasn't quite as pristine as I had hoped, however once applied the paint also added a certain pleasing snowy texture. 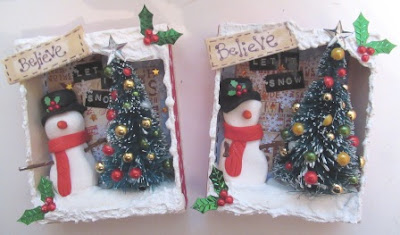 Next followed all the twiddly didly bits, first 3D textured snow applied to the pelmets, edges and bottom of the trays, followed by the holly and berries, plaques that I added a little beige felt pen to to add some "age" finally a stars to the top of the Christmas trees. 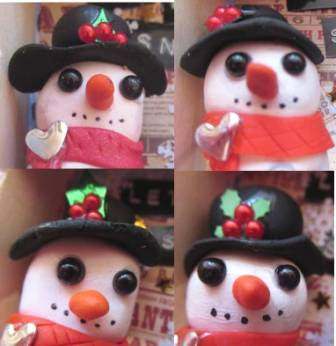 After allowing the snow to dry I was then able to add the Snowmen's eyes and to a few a mouth, then their buttons and a tiny silver heart on their scarves which fiannly gave each diorama its own individual character. 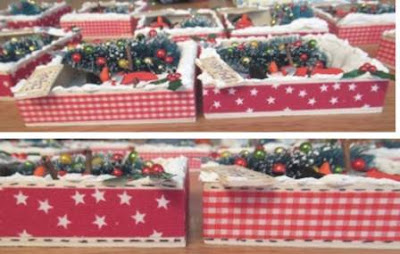 I thought the final touch was adding a sprinkling of translucent glitter, but before I did that I decided to add faux stitching where there was a small gap between the ribbon and the tray edges to add more detail. 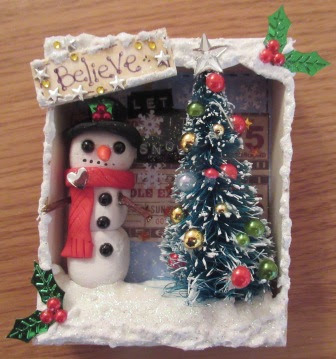 I am really, really pleased with how they have all turned out, but they were a lot of work ...... I reckon they took at least an hour each to make.

They have evolved just a little in the process, I really like the ones with the house stickers in the background but sadly I ran out of them ...... and I couldn't really wait for shops to get their Christmas stock in, but if I see any this year I will stock up for future projects.

I now need time to rest and recover before I decide whether I will repeat this operation for another year and really that all depends on whether I can gather up a few more trays in the meantime!
Posted by Its All Fiddle Fart at Monday, November 11, 2019 5 comments: