I just don't have a clue what to call these little things other than "peg doll Christmas scene decorations"??!!

I got the idea after seeing examples of peg dolls with acorn cup hats on Pinterest.  I've had a box of acorns, cups and twigs for about two years now, after collecting them during a weekend in Wells and so many times I was almost about to either chuck them or give them to nursery, but I am so glad I didn't now. 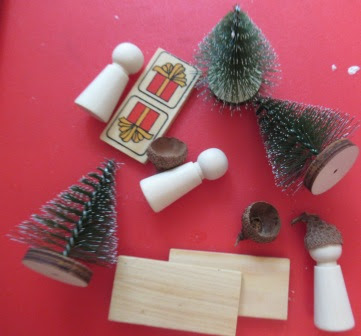 The peg dolls, sold as wooden counters, were from The Works, the small bristle Christmas trees, which are really lovely and I am praying that I can find some more were from Poundland (6 for £1), and the tiny Christmas dominoes were a charity shop find from years ago. 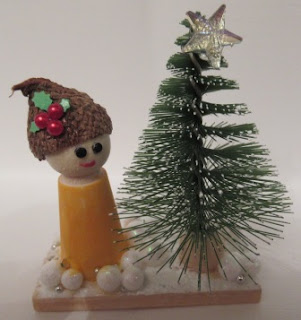 I coloured the "dolls" bodies with Sharpie pens, then glued on the acorn cup hat, adding a tiny punched holly leaf with three equally tiny flat backed red pearls for the berries. I then covered the picture side of the dominos with 3D effect snow, before changing the original circular, flat base of the trees for a natural coloured bead to give a little more space to work with. I added a few small, iridescent, polystyrene balls and tiny silver balls to fill the space around the peg doll and tree and give extra texture. 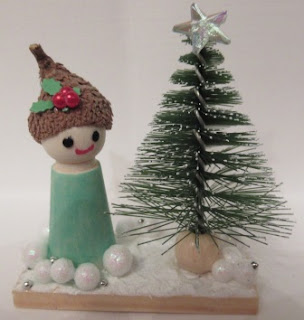 I foolishly used a fine liner pen for the eyes and mouth ..... when I really should have known from experience that they would bleed into the wood, doh, doh, doh  ...... however in this case I was able to salvage a near disaster by covering the original pen eyes with tiny black nail art studs, but lesson learnt, next time I will either use a black Biro or glossy enamel accents to do it.

That said, I think these will be the only three I make this Christmas because what I really wanted to do was make them into tree decorations but no matter where I put a screw eye hook (or pair) the blessed thing just turned upside down, it's a physics/balance type problem I know but I just couldn't work it out and after over an hour trying I gave up.  Any suggestions would be gratefully recieved because at the moment I am completely stumped.

As they are I can see them put among Christmas cards and/or other decorations on a shelf and if I had a few more I could perhaps even see them as place settings at the Christmas table.
Posted by Its All Fiddle Fart at Monday, December 02, 2019 3 comments: