While I was in Swindon with Di and Mrs A on our first meet up a little while back, Di gave me a very generous collection of Martha Stewart flora and fauna molds.  I was thrilled as I had seen them before and was sorely tempted but held back! 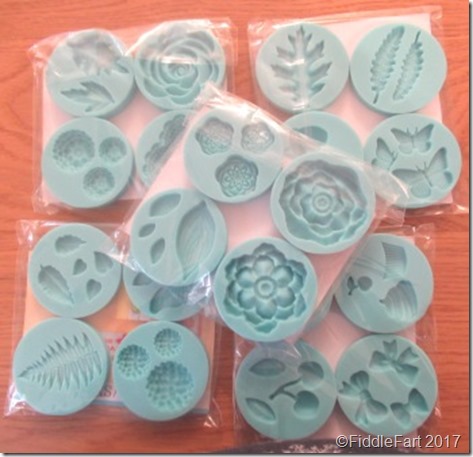 ….. And well,  after receiving such a lovely gift it would have been rude not to experiment with them. 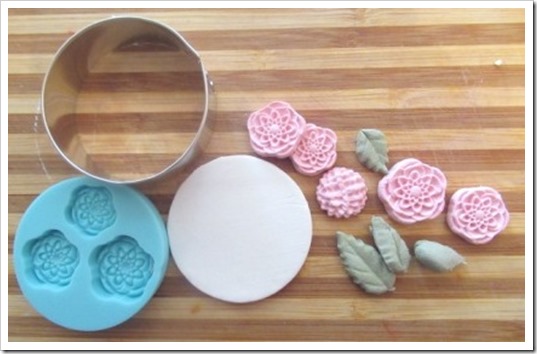 I decided to have a go at making a couple of tags, using air drying clay and cookie cutters to cut out the main tag part. 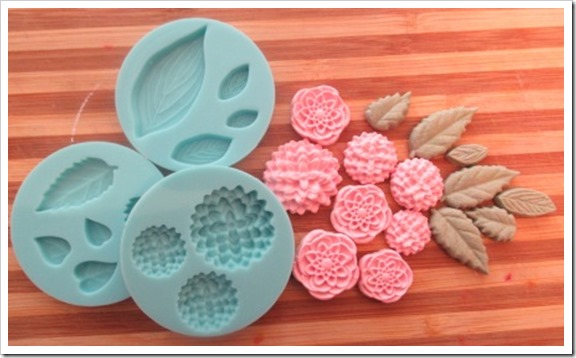 I coloured the white clay with a tiny amount of green and pink paper clay, which although I was a little  tentative, worked perfectly for colouring the moulded embellishment pieces. 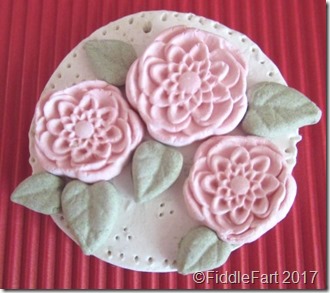 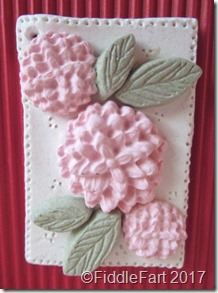 The flowers and leaves were stuck easily to the tags with a little water, forming a very secure bond. I added a little edging using a cocktail stick just to finish things off and also to make a hole for a tie. All that was left to do was allow the tags to dry completely, which due to their thickness took quite a while.

Once dry, I simply added a thread tie.  I was going to add a wooden bead but on this occasion I didn’t think the wood of the bead and the clay made a good marriage, sometimes I don’t like mixing too different a type  of material on an idea …… 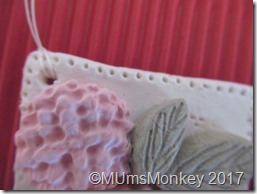 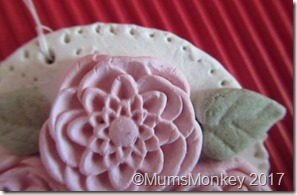 …… however if I were to repeat this or a similar project I think I would probably make a few extra clay beads for that purpose, just in case.
Posted by Its All Fiddle Fart at Monday, October 30, 2017 2 comments:

Young Miss Iris is proving to be quite an artist, but then I am biased! She was only three in June but every day I can see her little skills and attention for detail blossom and her thirst to draw at the moment is insatiable, but it was this last picture, drawn on Saturday, that really blew me away …….. 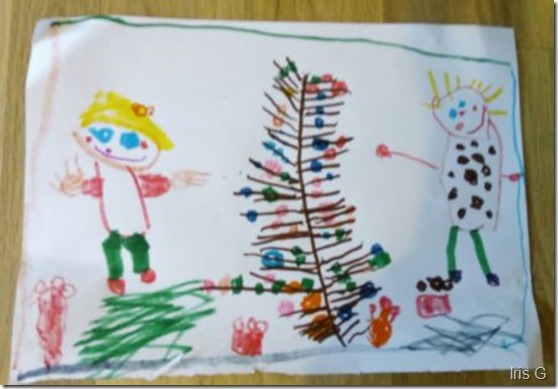 ……. it’s Iris and Bertie opening their Christmas presents, and was drawn totally without any adult putting their four pennyworth in! 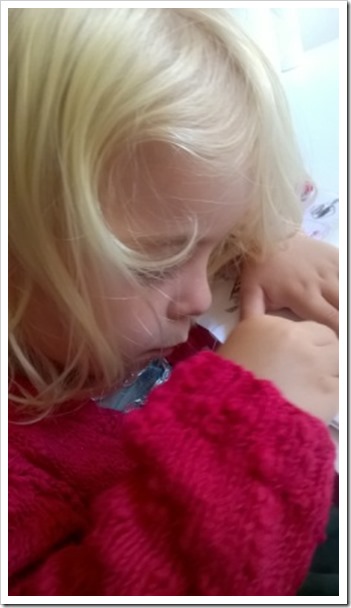 I have asked if I can scan it so that the details are really clear and then I am going to have a set of photos printed (Aldi photo processing is brilliant and only 5p a print) to go on the front of a card blank, eh voila, a gorgeous and very personal family Christmas card. We might put a tiny bit of glitter on the tree baubles perhaps, but only with the Artistes say so!!!
Posted by Its All Fiddle Fart at Monday, October 23, 2017 6 comments: 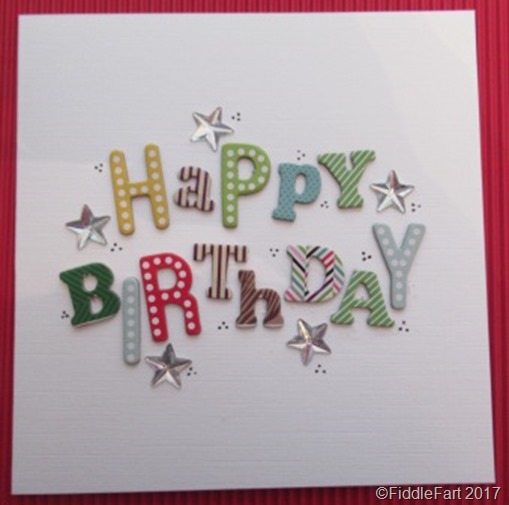 A very quick and simple Birthday card today made for my son Tom’s birthday. 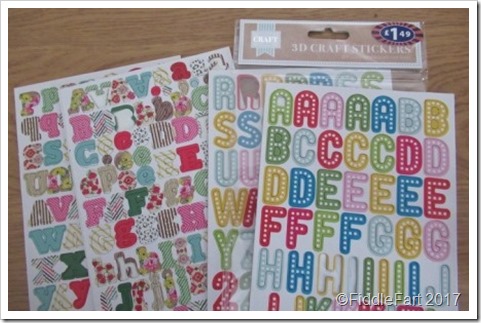 The self adhesive, chipboard letters came from B M Bargains and cost £1.49 a pack. I especially like the dotted letters as they lend themselves to being “encrusted” festively with clear flat back gems.  I am already planning on using them in the same way as above, but using Christmas words like Merry and Bright, Jingle, and Holly with accompanying small embellishments. 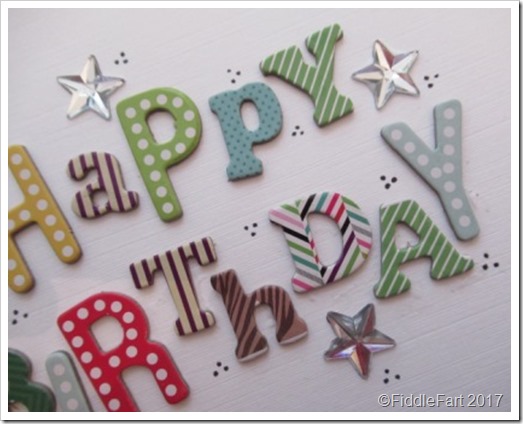 But I digress …….I started by sticking the middle P in Happy on first, as centrally as I could and then added the other letters by working outwardly in a higgledy piggeldy line. I then did the same with T and H on the second line, aligning them roughly with the P above, if that makes sense,  this means that I don’t have to worry too much about getting everything perfectly level and evenly spaced.  Adding clusters of three doodled dots and clear star gems bring the design together. A quick card made in, I reckon, under 15 minutes. 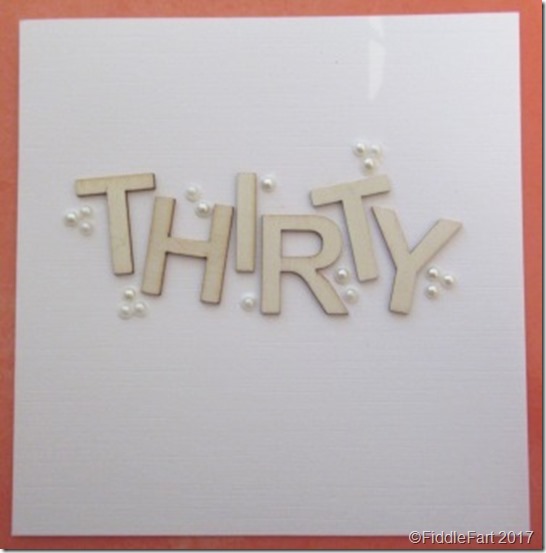 I wanted a really quick but effective card for my sister and brother–in–laws 30th Wedding Anniversary, they are not a fussy, over the top sort of couple, so I knew a plain and simple card would fit the bill perfectly. 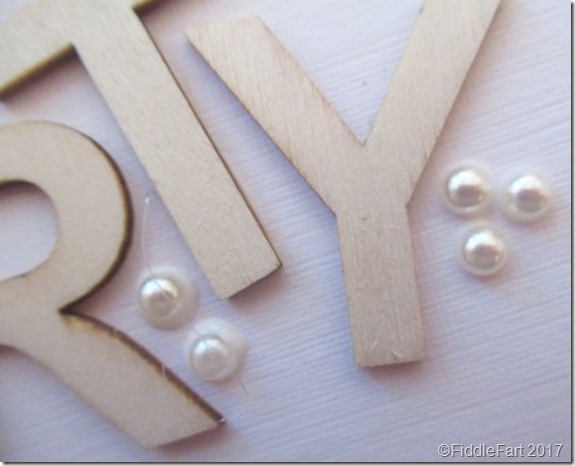 The wooden laser cut letters came from The Works (£4 a box) which I placed in a higgledy piggedly way because I am lazy and don’t really do precise, I find it a lot easier to have a casual approach when using letters and I think I got away with it.
The tiny flat back pearls bring the whole anniversary theme together. Simples!
.
Posted by Its All Fiddle Fart at Monday, October 09, 2017 2 comments:

These frames were meant to be Halloween tags but from the start I wasn’t 100% sure I was on the right lines, in my head I really didn’t think that the mini craft sticks and the classic metal bird embellishments would work together and suspected that I’d end up with a mismatched codge up, but despite my misgivings I to decided to persevere anyway. 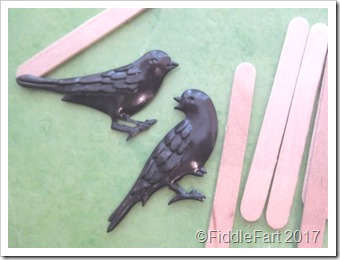 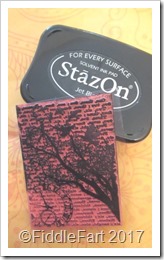 I started by colouring the sticks with a green Sharpie pen, and at that stage I was already thinking I was going down the wrong path, but again, I still stamped my Tim Holtz Components Time stamp onto a scrap of orange patterned paper to use as a background. 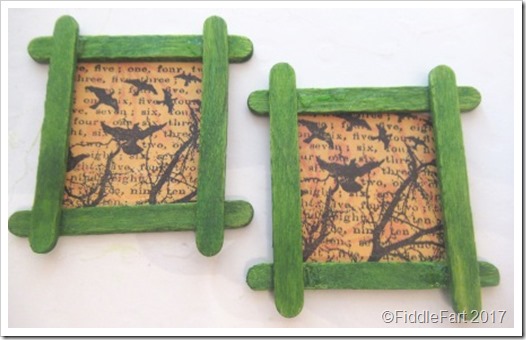 Cutting the background to size I glued it onto the frame and then added the birds, gluing them with E6000 for a really secure bond. 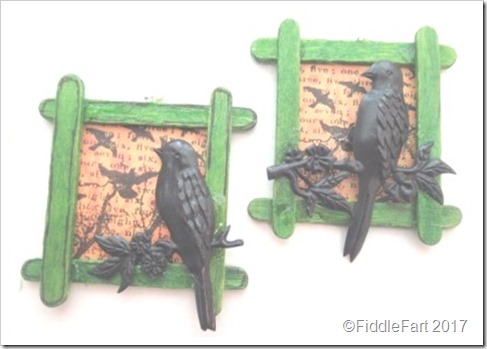 Hmmmmmmm, not too bad! I then tried adding other bits and pieces in the background, including stars, but all looked pants!!!!  I also found some very old Ranger Crackle paint at the back of one of my drawers and tried that, BIG mistake, but fortunately I was able to remove it with a damp cotton bud before too much damage was done.
I added a flat bail fitting to the back, but that was also removed, because I realised that the tag idea wasn’t going to work. It’s at this sort of indecisive stage of an idea that I start to “worry” it, trying this and that, but in the end I just get a mess and it ends up in the bin, so this time I am going to put the frames to one side and ignore them for a day or two or perhaps a lot longer.  I am thinking perhaps a card ………? But, to quote someone famous ….. “I’ll be back”
Posted by Its All Fiddle Fart at Monday, October 02, 2017 2 comments: