What A Total Crafting Mess! – Something To Make You Laugh Today

Sometimes things start out well, and then go horribly, horribly wrong! Sometimes you can turn it around if you put something away for a week or two and then go back to it, but on other occasions you should just have the good sense to bin what you’ve done and forget about it! 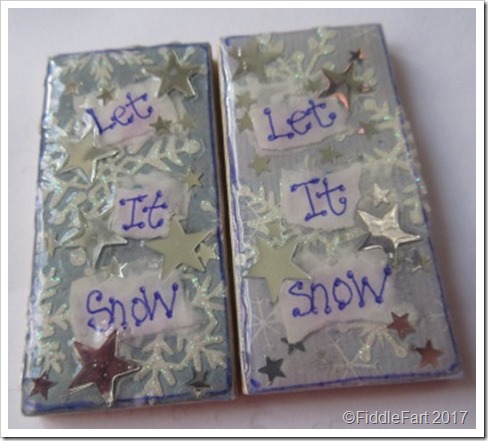 ……. And that’s exactly what I should have done here, instead of heaping layer upon layer of more mess! 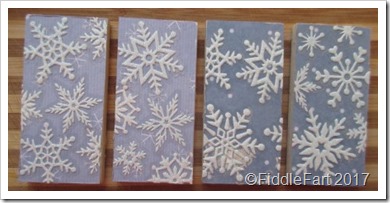 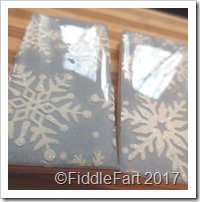 All started well, when I covered a few children’s picture dominoes with blue paper and glittery, self adhesive snowflakes, followed by a layer of glossy accents. 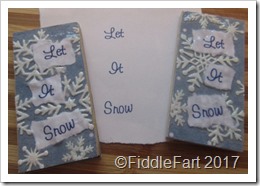 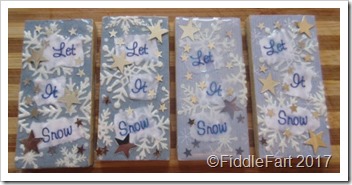 But when they were dry I didn’t know what to do with them, in my head I wanted a snowman’s head coming from the side ….. but as I didn’t have a stamp or any suitable embellishments, I thought I would just add a “casual” Let It Snow sentiment printed on my computer instead ….. plus another layer of accents and some stars  …… but the ink ran!
So instead of cutting my loses then and there, I hand wrote Let It Snow again in biro as I knew that wouldn’t run and stuck it on top of the original wording and added more flipping stars. Why mix stars and snowflakes, goodness only knows?  And as you can see all I did was create a hideous mess, now thankfully in a landfill site up the road!  But I hope I gave you a chuckle and what the …..? moment!
Posted by Its All Fiddle Fart at Wednesday, May 10, 2017 2 comments: