A Bit Of A Disappointing November Update ……

I am afraid this is a bit of a disappointing November update, I have been very busy, but not of a crafting type nature! I have only made two cards, one for wedding ........ (below) 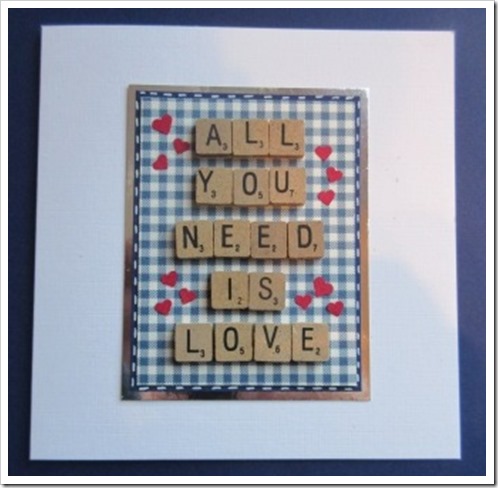 It measured 5ins x 5ins and used a handcut blank of white linen effect card. I used small Papermania adhesive Scrabble Tiles for the wording.  I have had these tiles for years. They were quite expensive at the time, but I bought them up whenever I saw them reduced, once at the HobbyCraft Show at the NEC and in shop sales, as I knew they were a timeless embellishment and could be used on so many things.
The letters were set on a navy gingham card and then mat and layered on navy blue and silver, with a little white faux stitching using a white gel pen. I then added a few punched red hearts to add a splash of colour, fill some empty space and add to the romantic theme. 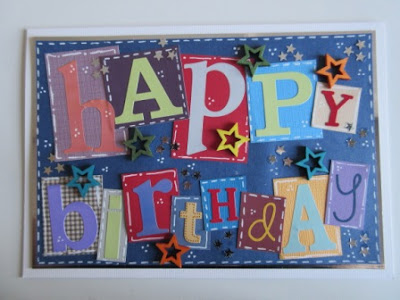 And the other card I made was for my Dad's birthday, which was A5 in size, using a white, ribbed effect card, which is very similar to quite a few I have posted of late in an effort to use up all my old alphabet stickers. 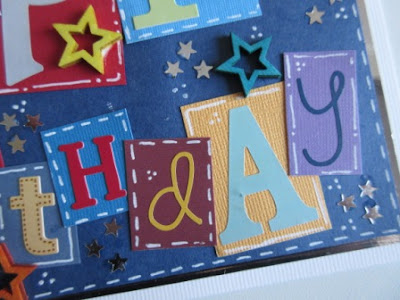 But ...... then Marc came to stay with me for an all too brief weekend in September to visit the Scarecrow Festival in the nearby village of Pattingham, accompanied, naturally by Hugh his monkey! 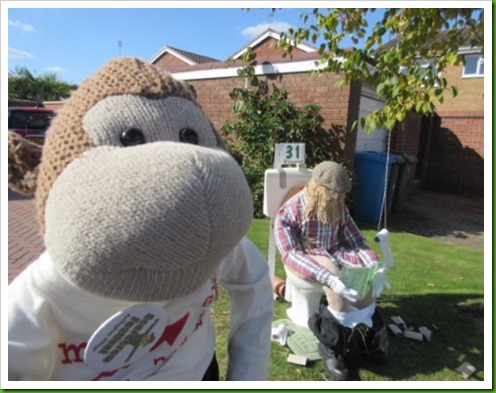 Needless to say much vodka was quaffed accompanied by much laughter. 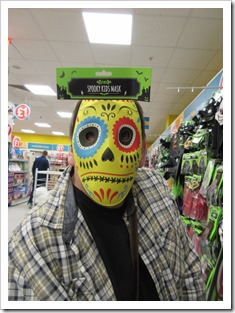 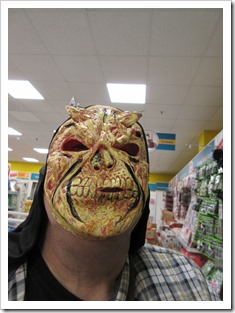 We also had a little time to “do” all the Poundshops of Wolverhampton, where, as you can see, Marc played me up something rotten and in the end I decided that the only way to cope with him when he’s like that, is to treat him like a naughty boy!!!!!
Sadly, the Halloween stuff for using on Halloween projects was even more disappointing this year than last ….. and last year was pretty dire!  Seems shops are stocking up on the big stuff, but small skeletons, stickers, packs of large black spiders that can be glittered and bejewelled and skeleton hands ….. forget it!!!  As I have always said, when you see something you can use buy it, and buy it in bulk for other years and ideas, because the chances are you’ll never see them again.
Marc also helped me cut and sort some old music papers into packs to sell on e-bay and then punched out 100’s of birds for the same reason.  I have only just started listing my craft stuff on e-bay, it’s all a bit slow as listing takes quite a while and I wait for free insertion offers as I am only selling most things, at the moment, for about £1.50 so it’s not in my best interest to pay a 35p fee just for the pleasure! 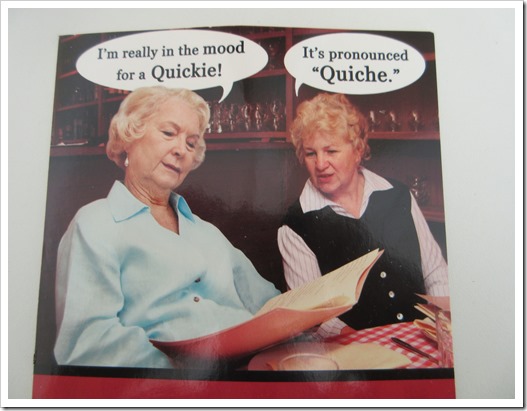 The above picture is just like me and Marc when we’re out fine dining …… Marc is a bit dyslexic so this is typical of many of our conversations!!! 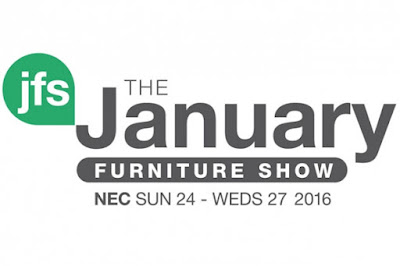 http://www.januaryfurnitureshow.com/
Marc’s partner Ian has also asked me to help as a Design Assistant/Stand Dresser at the January Furniture Show in January 2016, like I did last January  It is very hard work, not at all glamorous, and very, very, very cold and there is so much running about you wouldn’t believe, I am sure I wore about an inch off my leg length last year! But it’s yet another opportunity to work with such a wonderful and talented interior designer, Ian has taught me so much and is incredibly generous with his time and tutorage, and if I cock up, he’ll tell me!!!  I just need several pairs of sensible shoes, a scarf and my own trolley!!! 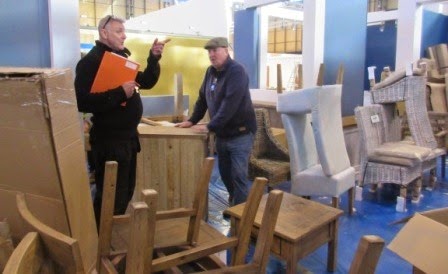 Needless to say, I shall be asking for Ian’s advice, (at mates rates) when I make my eventual move to Evesham when I will have a new house to decorate and furnish. After going round the Antiques and Collectors Fair at the Three Counties Showground earlier this year I think he’s got a fair idea of my style …. a bit eclectic, which he summed up as being mainly Edwardian and some industrial and a touch of 60’s retro, so I think he has got his work cut out!!!! 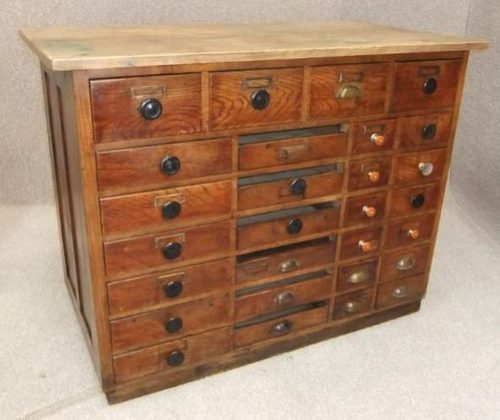 For Christmas I am going to decoptach Tom’s first old wooden Galt bike for Iris.  It’s 30 odd years old, and did for Tom and Lucy, and then all the little cousins that followed in turn after that, before being returned to me, where it has just been in the garage for the past 10 years.  It’s still as sturdy as ever …. all I have had to do is buy a new set of wheels from Galt (couldn’t believe they would still be available for only £10) and the decopatch papers, well they’ve been in my drawers for a while now, just waiting for a project. 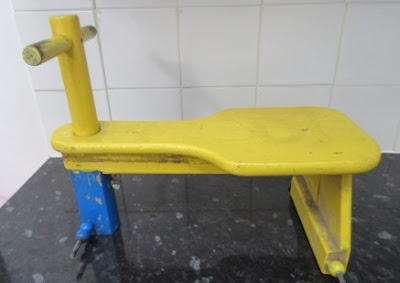 It doesn’t matter to Iris whether her presents are old and re-hatched ….and I am hoping that when it’s finished I’ll have created something that can become an heirloom for yet another generation …… like the toybox I “did up” for her last year, which originally was Andy’s first fishing tackle box, which he made when he couldn’t afford a “proper” one. 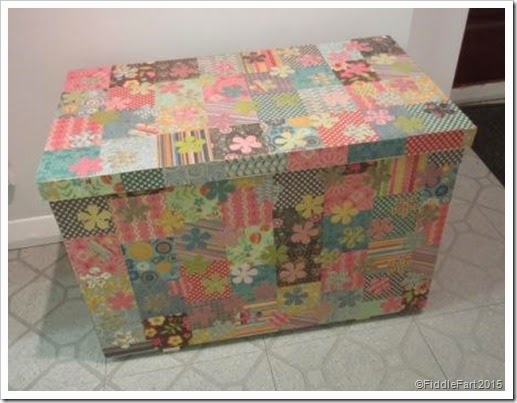 I also want to make some more mini printer frame type Christmas decorations like I did about 4 years years ago. I want to give them instead of a Christmas card to special friends, as I am always aware that most Christmas cards end up getting thrown out, where something like this will, hopefully, come out year after year.  I’ve got quite a few tiny bits and pieces put aside and I’ve also managed to buy some tiny resin Santas, snowmen and Christmas trees from Forget Me Not Crafts in Evesham at bargain prices …….. so all I need is the time. 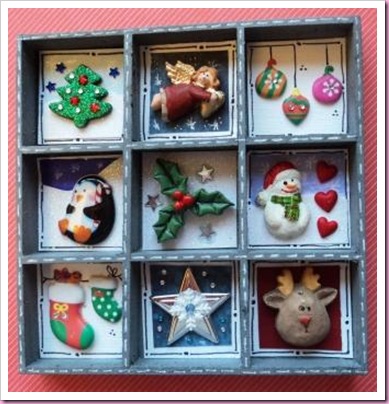 As a heads up, there are some interesting bits and pieces in The Works and it’s worth looking at their website for online offers. 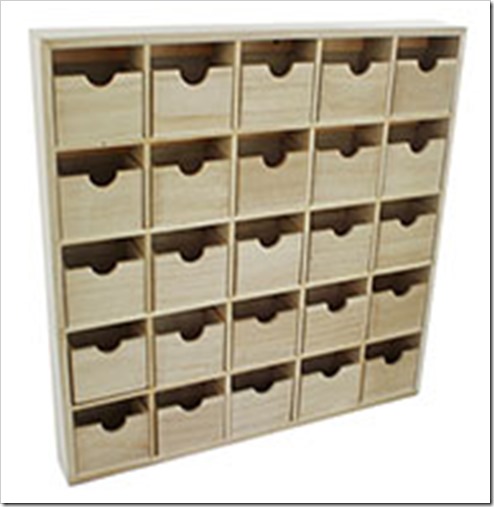 I thought this set of 25 drawers would make a great base for an Advent calendar (£12) and I am intrigued by the wooden briefcase, I would like to see it in real life to work out its potential, and am sorely tempted, despite my best efforts towards frugality!! 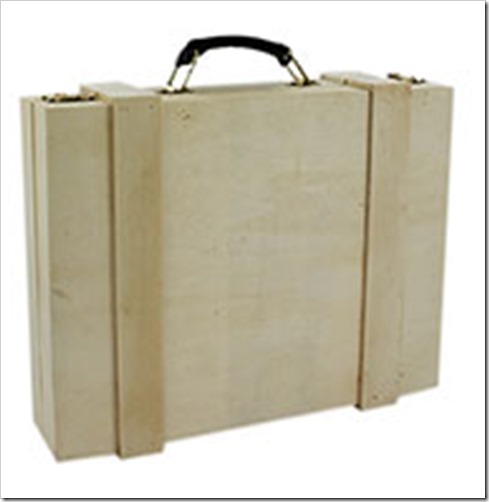 I am not a great die cutter but I also notice they have begun selling dies, don’t know about all their designs or quality, but again. might be worth a look (below 12 Days of Christmas £10) 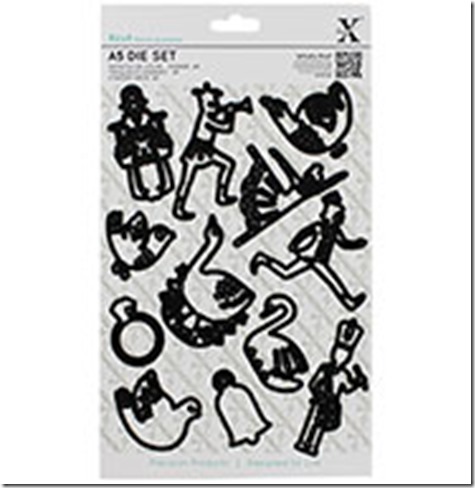 Sorry, not the most brilliant catch up post this month ..... I promise to work harder for next month!!!
Posted by Its All Fiddle Fart at Sunday, November 01, 2015 7 comments: