I am trying to keep my cards really simple this year, following on from Marc's very beautiful cards from the past two Christmases. 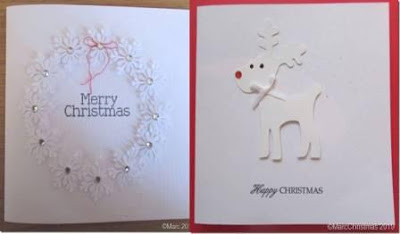 However while Marc die cuts a lot of his shapes, I am a big fat cheat and tend to use ready made embellishments and/or toppers, but it's still only early days ....... so you never know. 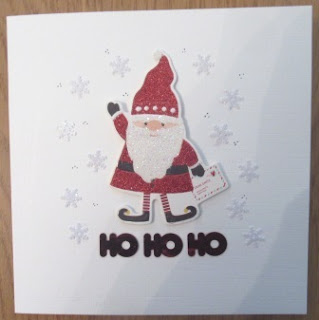 Anyway, I have made a few considered purchases from Hobbycraft this year as they have already started to get some of their Christmas stock in and the prices seemed OK. 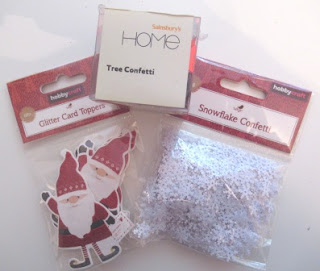 So, for this card I have used one of their glitter Santa toppers (6 for £1) and my, already top crafty festive favourite, snowflake confetti. The Ho Ho Ho confetti pieces came originally from Sainsbury's but was one of my charity shop finds for a few pence ...... there are other shapes in the box, but it was the Ho Ho Ho's I was after! 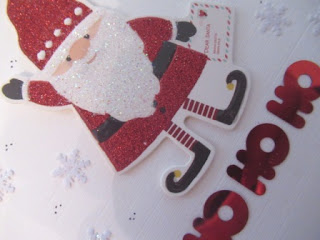 I added white glitter to Santa's bobble, hat, beard and cuffs, as if he wasn't glittery enough, plus Ranger Glossy Accents on his boots, and Ranger white Enamel Accents on the fur on his hat. 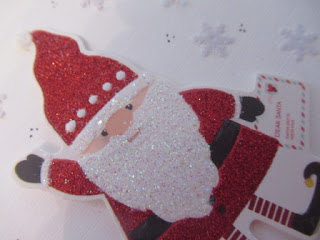 I then simply put the embellished Santa in the middle of the card, adding three pieces of the confetti below and a flurry of snowflakes and a few clusters of three black dots around him.  Simples!
Posted by Its All Fiddle Fart at Tuesday, September 03, 2019 1 comment: