Following on from yesterday I spent far to much time working on this snowman tag trying to get him to look right before realising it wasn’t me being ultra fussy, it was the wooden tag! 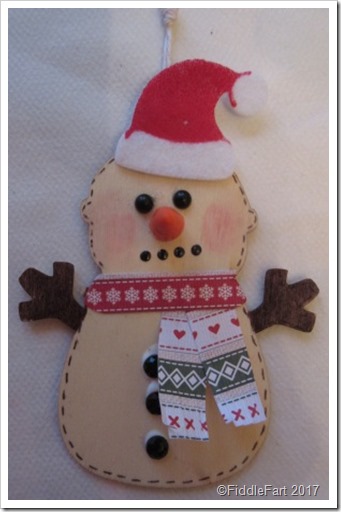 At first, I thought, from the outline that the snowman was wearing a hat, but though I tried to cut several out they never seemed to fit or sit well on his head, so I gave up and gave him a self adhesive Santa hat (from Yellowmoon).  I then gave him a scarf using scraps of paper and that seemed to work OK …….. 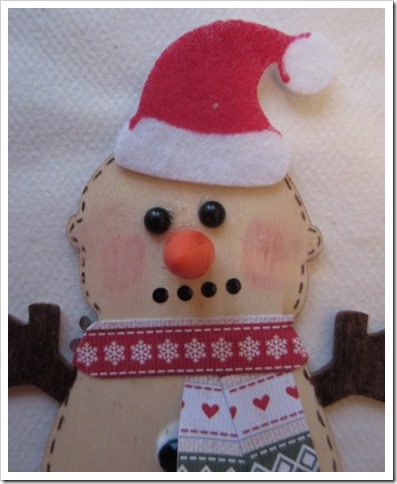 …….But trying to get a cute snowman face was a nightmare.  I used a fimo carrot nose (moulded and then baked) because I thought it would add character and extra dimension, but no mater where I put his eyes and mouth he always looked decidedly dodgy. I really thought I was losing the plot, then I looked again, what I thought was the rim on his bobble hat were ears, and I am sorry, snowmen DON’T have ears!!! I was trying to create a snowman face, but what I was actually seeing was a cartoon “human” face …… and, what made it worse, when I really looked, was the ears weren’t even level …..
So, this snowman is destined for the bottom of a box, to remind me, whenever I happen upon him, to look carefully an snowman blanks ……because, for me at least, snowmen don’t have ears!!!! ……
Posted by Its All Fiddle Fart at Wednesday, January 25, 2017 4 comments: