I think by now you’ll have all realised I have a huge thing for lights, especially chandeliers, but my yearnings are much, much bigger than my purse will ever be!

The light (above) is in my bedroom.  It is one of the very few things I bought from my old house, it was only about £30 and for convenience sake it would have been easier to leave it behind and simply get another one, but on this my heart ruled.  When the Duke died my bedroom became a bit of a sanctuary and the changes I made in there, without sounding heartless, showed me that I could move on. 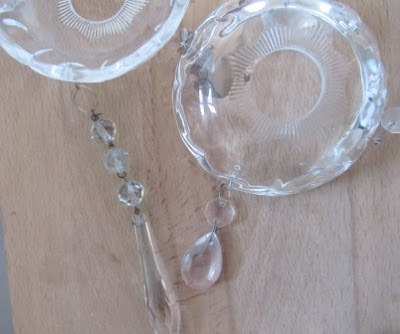 When I changed the way I decorated my Christmas tree  for Christmas 2018 I had quite a large collection of chandelier drops that I had taken off the various charity shop lamps I had bought,  but having said that, I had already decided to revamp the light with them, but had never got around to it …… until a huge spring clean in February made me get my finger out.

I then went about lengthening the existing drops in the centre of the beaded chains between the saucers with the last of the prisms and faceted glass beads. The final touch was to take and lengthened the original oval drops from the saucers along with their beads to go either side of the prism drops on the chain, if that makes sense (?) making the light far more elaborate and fuller looking.  I am not sure if the pictures really do the finished result justice but I am sooooooo pleased with how it looks now you wouldn’t believe!
Posted by Its All Fiddle Fart at Monday, March 25, 2019 3 comments: