Please bear with me, this is just an experiment! 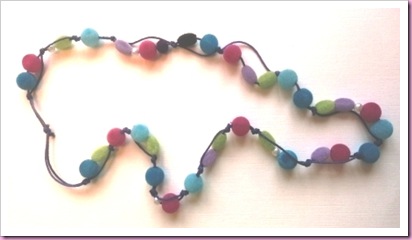 Whenever my friend Lisa and I go to the Hobby Crafts Show at the NEC Birmingham I always make one dodgy purchase,  and it’s taken me until now to admit what that purchase was …….. bags and bags of these fluffy beads that look like some sort of suckie sweet!  They were 50p a big bag and I bought them in every colour, what possessed me? …. Anyway I decided the other night that I would never use them and was putting them ready to give to a friend when I thought I would have a play, before saying goodbye to most of them …. 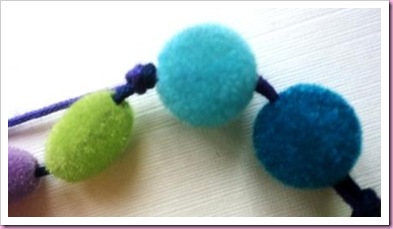 I cast my mind back to how they were presented on the stall, which was knotted on/and between  two lengths of thin coloured cord and this is what I came up with. 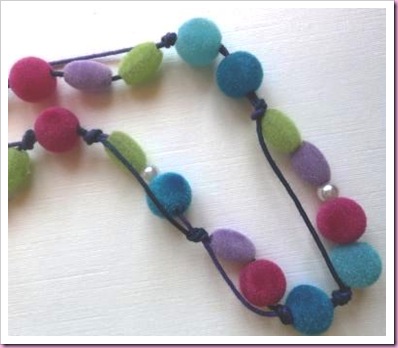 I used a purple and a blue cord and threaded two or three on one colour, then the other and also on both at the same time, making a knot after each section  (if that makes sense).  To be honest it looks OK and I would wear it, but really the cords could have been a lot longer.  I knotted the two ends together, I didn’t think as this was my first attempt it was worth putting on a proper fastener. 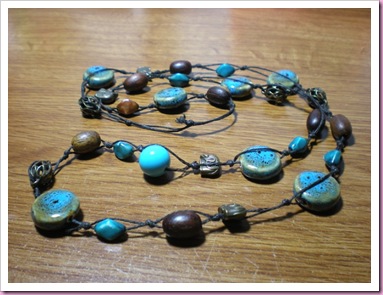 I found this picture on Google and think that this was the sort of thing I was trying to do in my mind’s eye …. oh well back to the drawing board!
Posted by Its All Fiddle Fart at Monday, July 02, 2012 9 comments: