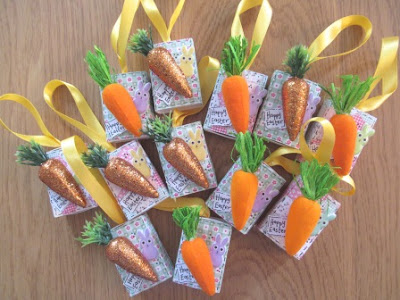 I used small matchboxes I found in packs of 8 from The Works in various sales over the past year or so.  I simply covered them with scraps of spring design papers. 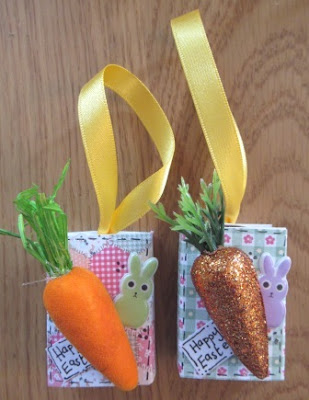 The glittery carrots came from Paperchase, they were a bit expensive at £2 for six.  Originally, I tried to put a brooch back on them but that didn’t work as the glitter layer just came away, it might have been the heat from the glue gun I used. Sorry, I can’t remember where the plain, fluffy carrots came from but they are rather nice and good quality.  I know Poundland have something similar but the leafy tops are quite plasticy and a lot less lush. 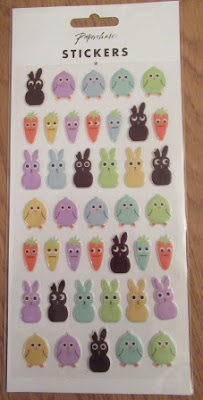 The rabbit stickers came from Paperchase which I reckon are versatile enough to use on more general cards when Easter is over. To be honest over the past couple of years, after being such a huge fan, I thought that the Paperchase sticker designs have not been as appealing as they have been, however the last time I was in I bought quite a few packets including flamingos, cat faces and lobsters which I hope to use in the coming months. 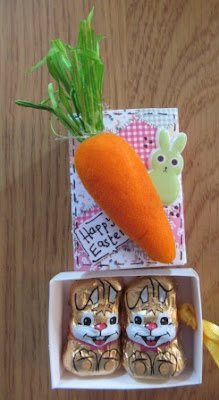 The little chocolate rabbits were from a tub of 25 from Lidl (they also do tubs of frogs and chicks).  I handwrote the sentiments with a black fine liner pen and as an after thought punched a hole in the top of the drawer to add a ribbon hanger, so the box could possibly be hung on an Easter egg tree or festive branch.
Posted by Its All Fiddle Fart at Tuesday, April 09, 2019 1 comment: