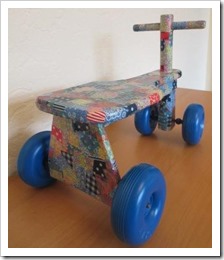 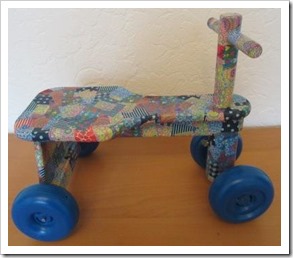 ……. as I told you last month, thirty odd years ago Tom had a little, wooden Galt bike for Christmas, it “did” for him and Lucy for five/six years and then it was put away. 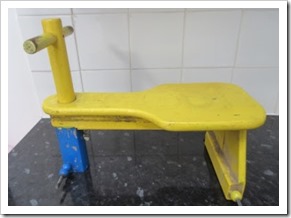 Several years later a nephew and two nieces came along, it was duly done up, and “did” for them too, but when they had all outgrown it, I had the foresight to ask for it back and it has been sat sitting in the garage ever since for about twenty years. 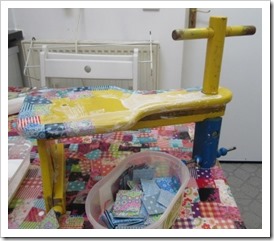 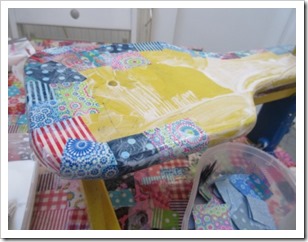 Then, Iris came along, and my thoughts again returned to the little bike, “if” I could get some new wheels, “if” they still did them after all this time, then I could “do” it up yet again for Iris’s 2015 Christmas present, and as I also said last month, when I contacted Galt they still had the wheels so for just £10, I was rock and rolling!!!!! My plan was coming together! 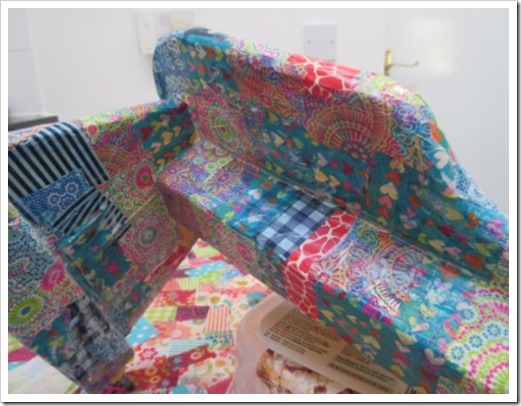 All I had to do was get my brightest Decopatch papers out and start gluing.  It was fiddly, there were hardly any straight lines and there seemed to be so many little steps and round bits to work round, but in the end I would say it took me about three hours, from start to finish, including tea breaks. 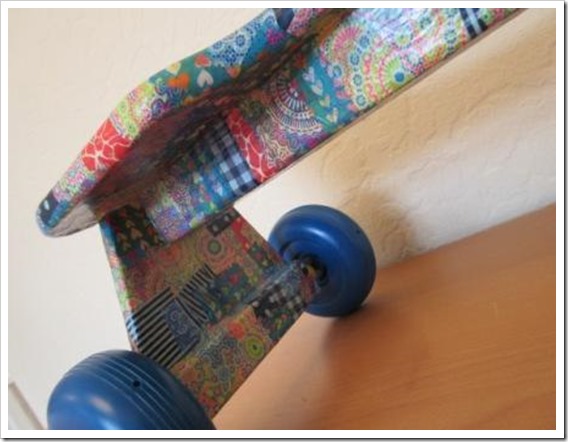 This was then followed layer upon layer of clear, quick drying varnish …. so many I lost count, but I wanted it to be as durable as possible. 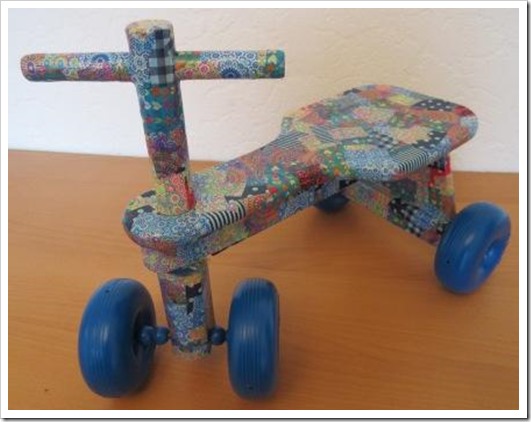 Et voila, it’s now all done and dusted waiting for perhaps an  little L Plate and for Santa to deliver it ……. I am soooooooooo chuffed with it, you’ll never know!!
Posted by Its All Fiddle Fart at Tuesday, December 01, 2015 6 comments:

After sooooooooo much nagging from Marc you wouldn’t believe,   I have finally decided to sell off some of my unused/surplus crafty bits and pieces via Fiddle Fart from January 1st 2016.  It might be a bit hit and miss to start with until I have a system going, so you will have to bear with me ……..
What I think I will do is put up a picture of the item(s) I want to sell, with a description, what I want for it, plus P & P costs.  All payments would be via Pay Pal ……. The first person to e-mail me would be “the winner” with 24 hours to pay – and as soon as an item is sold I would delete it from the site …….. all proceeds would then go to my moving fund, to help with all the fees etc. I am certain to accrue!
The best time for me to list & sell would be a Friday, when I can post items on a Sat. Mon & Tuesday – so it may be worth you popping by on Fridays in the New Year.
If any of you have any experience in selling this way I would be grateful of any advise ….
Posted by Its All Fiddle Fart at Tuesday, December 01, 2015 4 comments:

Well nearly ……. and to celebrate, I thought instead of one long post incorporating everything I’ve been up to this past month, I would give you eleven separate posts over the next eleven days.
Posted by Its All Fiddle Fart at Tuesday, December 01, 2015 3 comments: