This is my second exploration into the world of making Christmas diorama's with a few small changes following on from the original one I posted last week. 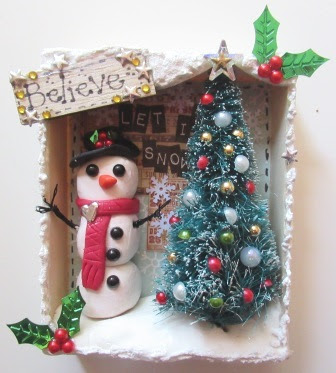 After discovering that I only had two trays (originally used as packaging for small wooden embellishments) with which to make any more (I could have sworn I had at least ten in my box) I needed to think on my feet, so I looked in the box again and had a think about these divided ones....... 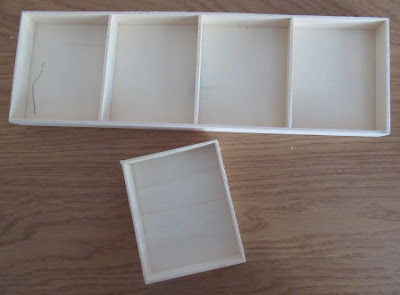 ...... far too big to be cute, but, what if I tried cutting them, it would mean sacrificing two compartments, but in turn would give me two more complete diorama trays? I tried, it worked and now gave me the potential to make another ten dioramas, which is probably more than enough for this year, so win win I guess. 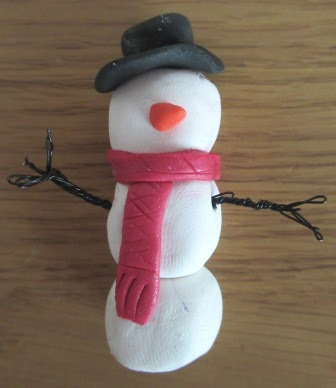 My idea was to use the shorter sides of the tray as the top and bottom of the scene, the opposite of my original diorama, this, I reasoned, would alleviate the need for so much fiddle fart when creating the  background scene between the tree and the snowman. I made a new fatter and taller snowman, again using Das oven baked clay as the new tray was also slightly bigger than the original. With this version I again used twisted black wire for his arms, however, I plan, with my next version (??) to use some small dried twigs that I'd forgotten I had, to make the snowmen look a more realistic (??). 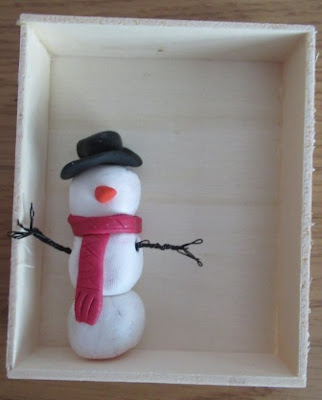 Then, I discovered that I also fewer larger trees than I thought ...... doh! However, a quick search on The Works website bought up these packs of two 10cm bottle brush trees. 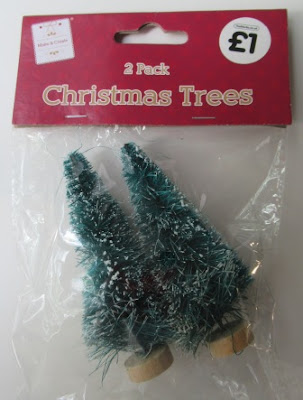 When they arrived they were taller than the original one I used, but by removing the base, and sinking the bare wire into the foam dough snow it just about fit the frame and I thought I could simply add the star to the top of the snowy "pelmet" instead of the actual tree. 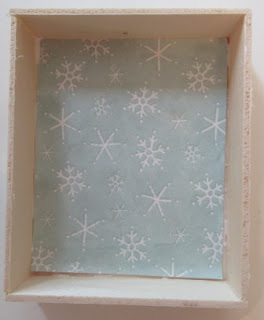 I lined the back of the tray with a scrap of Christmas design paper, to be honest the design didn't really matter as it would be pretty much covered in the finished diorama. 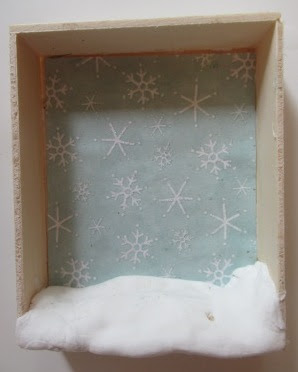 I covered the bottom with Martha Stewart craft clay, that has a foam type consistency. However, my supply is also liable to run out too (when I go into mass production) so I ordered a huge tub of White Air Magic Soft Modelling Dough from e-bay, as I know I will definitely find other Christmas projects to use it with, as well as being an lovely medium for Iris and Bertie to play/create with. 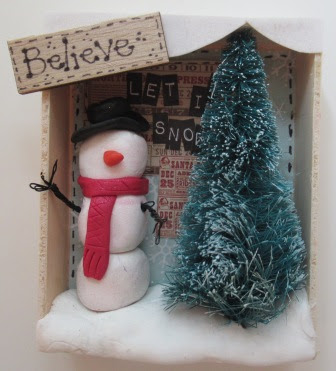 I added the tree, fixing it in position securely with E600 glue. I didn't fix the snowman in position until I was sure that the "Let It Snow" wording, using Tim Holtz Idea-ology label letters, would be clearly visible between the two, this took a little fiddly jiggery pokery. 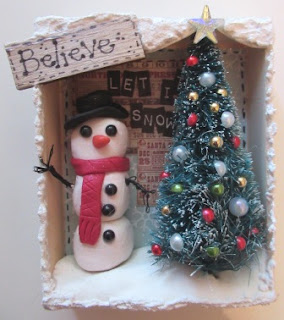 The "Believe" plaque was a wooden embellishment I trimmed down and used the back to write on, but in my next version of the idea I intend to use the scraps from the cut up tray instead and use a black Biro on it so that the lettering won't bleed into the wood.

I originally used Dovecraft 3D pearl on the "pelmet" and around the edges and bottom of my first diorama but swopped it for 3D Effect Snow which  I found online, it doesn't flow as smoothly as the Dovecraft and has a weird gritty type texture, but it does look more realistic.

All that was then left to do was add all the fiddle farty bits, stars, baubles, eyes and buttons etc., however  I decided to replace the small snowflakes in the corners for holly and berries because amongst the snow they seemed to disappear. 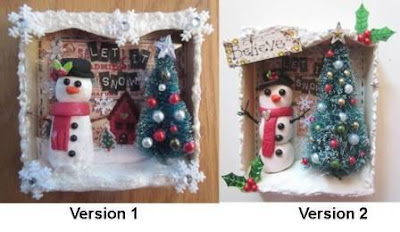 Again, I am pretty happy with the results, I think I am now ready to go into mass production ..... so watch this space!
Posted by Its All Fiddle Fart at Monday, October 07, 2019 2 comments: