A Large Thank You Card

This card is A5 in size and is made using a white linen effect hand cut card blank. 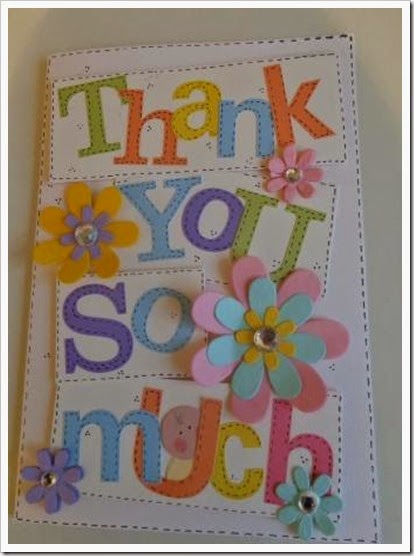 I don’t usually make cards these days, but I make this one for someone special at work. She had been given so many clothes and other bits and pieces for the baby she was expecting by her husbands work it had been quite overwhelming and she wanted to say a very special thank you…..
….. which gave me the idea of having a baby hiding behind one of the letters which were a jumble of capitals and lower case in an effort to use up odd letters, which were then faux stitched in black pen.
The flowers were already punched, they came from Lakeland when Lakeland had a crafts section, all I had to do was add the clear, flat backed gems.
Posted by Its All Fiddle Fart at Wednesday, October 29, 2014 3 comments: