Experimenting With The Idea Of Easter Jars–Not One Of My Best!!!!!

I think I really need to experiment a little more with this idea, inspired by some Easter jar ideas I have seen on Pinterest, what I have done just doesn’t seem to quite come together for me. 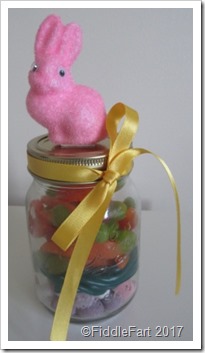 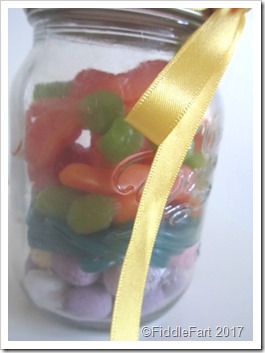 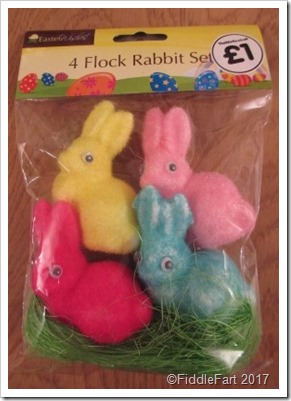 ….. and I thought the pack of flock rabbits from The Works (£1) would come in useful in the run up to Easter, either for this project or something else …… and as for the gummy carrots, (£1 from the Co-Op), well, they’re confectionery, so wouldn't go to waste! 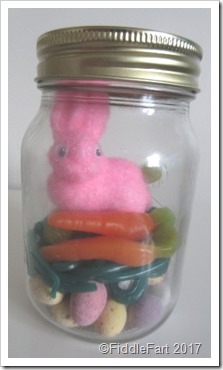 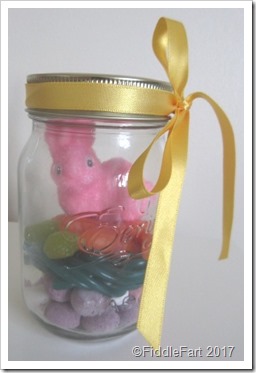 The idea was to layer the sweets inside the jar, attractively, which is where I failed disastrously!  I put Cadburys mini eggs at  the bottom, then a layer of coiled, dark green, raspberry flavour laces (for the grass), but I think Poundland may sell a lighter green, apple flavour lace.  However, I couldn't find a chocolate rabbit that fit, (too big or too small) so that’s where a flock one came in handy, sat sitting, among the gummy carrots ……. but, it looks a mess, the poor, panicking rabbit’s eyes says it all, he is definitely not happy being stuck in a jar! 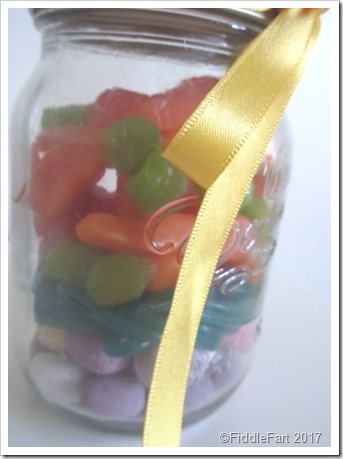 So I sat him on top of the jar instead, held in place with a foam pad, but I think, when/if I have another go, he should be glued there instead.  I also need to cut a green paper/faux grass circle to stick on the jar lid too, and the ribbon, well I think that should be much thicker and probably green.  So, all in all, I have got it all wrong ……. so it’s back to the drawing board, with a few other ideas ……….. but,  at least I got to eat the sweets as I wrote this post, as they were in very grave danger of going stale!
https://uk.pinterest.com/search/pins/?q=Easter%20Jars&rs=typed&term_meta[]=Easter%7Ctyped&term_meta[]=Jars%7Ctyped
Posted by Its All Fiddle Fart at Wednesday, February 08, 2017 1 comment: