I think you all know me pretty well by now and that if I get frustrated with a project it often takes me an awful lot of effort to return to it ....... and that is so true of my Halloween truck.  I got smudge marks on the fronts of some of the drawers and that was it ........ but now I have bitten the bullet and returned to it.

Although I only had half of the drawers covered I decided I needed to start embellishing these before I went any further so that I could work out which way I was going to go and boy was I glad, in the end that I hadn't covered the rest, because lesson learned, using such highly patterned paper was a BIG mistake!!!! 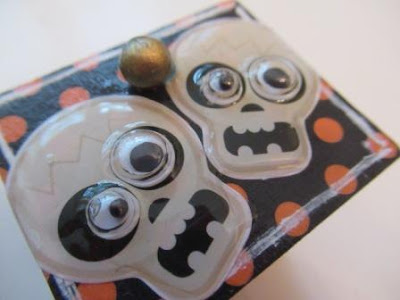 So ...... the next lot of drawers I cover (for the opposite side of the truck) will be coloured with a black pen first, to prevent smudging and then the fronts covered with plain papers after.

The original patterned papers, though lovely, just distracted and failed to make the embellishments stand out leaving the drawer fronts in danger of looking a total mish mash, however there was no way I going to start all over again, so I persevered with what I had and I think I may have got away with it, to my satisfaction, at least.

I used a variety of Halloween stickers left over from last year, however I quickly discovered that my favourite  plastic ones let the patterned paper underneath show through, so another lesson learned and another reason for using plain paper on the rest of the drawers. 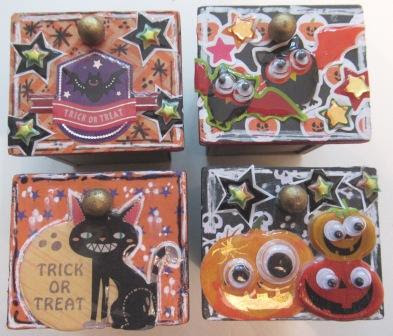 After a few successful drawer fronts were basically embellished I decided to repeat the designs again, giving me two similar, but not exactly the same designs, for each side of the truck, so that I could get away with the change to plain papers, giving me a half and half mix, which I think should work out OK.

To help break up the pattern round the drawer front edges I used white and/or black pens to go round them, which I think also worked.  I then went over each front with Modge Podge Gloss Lustre to set everything and then when that was dry added googly eyes to any faces, a few 3D stars here and there before applying a good layer of  Ranger Glossy Accents to each embellishment, like the skulls and pumpkins to add extra dimension.

That's as far as I have got, with eleven drawers now completed ...... I am pretty pleased with how they have turned out so am not as disgruntled as I was when I first started, which also means I am pretty eager now to complete the rest of the drawers ........... so watch this space!
Posted by Its All Fiddle Fart at Tuesday, April 21, 2020 1 comment: