I put this Christmas bauble together for a friend at work who had recently lost her cat but wanted to keep its memory on her Christmas tree each year. She said she didn’t want anything fancy, just her cats name. 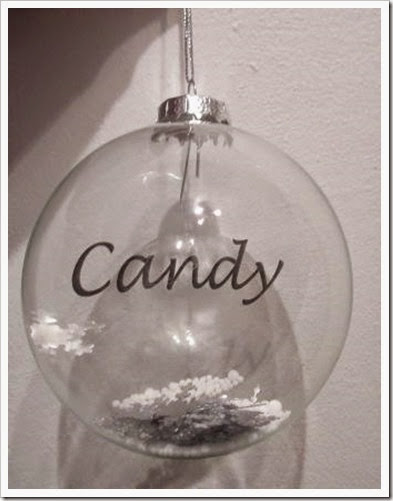 Now, when I was in London with Marc I noticed that one of the trends this year in Christmas baubles was to use a printed, monochrome acetate in them, either plain text or a picture, so I thought I would try it …… 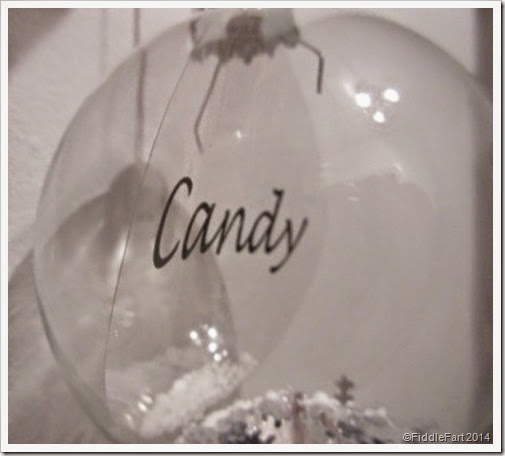 So nothing fancy …..  I just typed the name in a circle, guessing the size I needed and then printed it off on acetate.  I then cut out the circle, which proved a little too big, so trimmed down again and then rolled it up to fit into the opening of one of the clear, glass baubles I got in the Dunelm January sale this year, reduced from £4.99 for a box of three to £1 (well, naturally, I bought all they had).  Originally they had a swirl of paper tartan ribbon inside, but that was soon fished out. Luckily the circle held its place and then I added a sprinkling of small polystyrene balls and silver snowflake confetti.
That was really all there was to it,  but it has increased my curiosity for using acetate in other baubles, perhaps next time using a suitably festive monochrome picture,  even though the photocopier I use doesn’t particularly like acetate!!
Posted by Its All Fiddle Fart at Sunday, November 30, 2014 6 comments: