Iris is Hermione Granger/Harry Potter mad and had been telling me in wonderment about quill pens, so I decided that I really ought to have a go at making one for her.

I found a pack of  eight large, black feathers in Hobbycraft for just £3 giving me more than enough to make a few more if the need arose or for other projects.

I already had a few pen nibs from my days working at the Girls High School.  When the school was being refurbished so much wonderful stuff was just thrown in the bins, however I did manage to rescue several tins containing several hundred of these pen nibs which have since been either been sold or given away, but I did keep a few back for me as well. 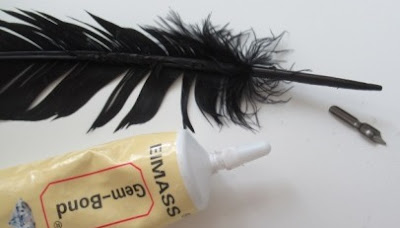 I used a really strong glue to attach the nib to the quill giving it a good length of time to allow it to adhere properly. 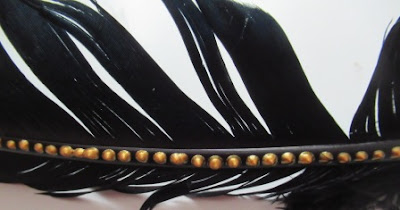 The finishing touch, to make the pen look a little grander, was made by dotting gold Dovecraft 3D effect paint (£1 Poundland) all along the shaft of the feather.  It didn't take that long or that much effort to make one little lady a very. very happy little wizard ........ and I was really chuffed with the results.
Posted by Its All Fiddle Fart at Tuesday, November 05, 2019 1 comment: