I don’t use brads a lot …. if ever,  so whatever possessed me to want a brad maker set goodness only knows! When I first saw one it was far to expensive for what it was ….. so I waited and waited until I saw one marked at half price, bought it  …… and have never used it, until now …. about three years later!!  What am I like?!! 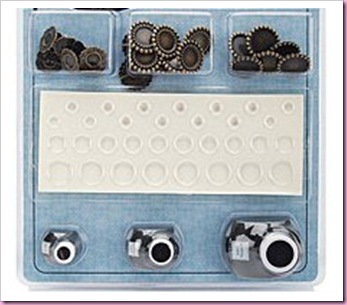 However, my friend asked me at Christmas if I could “tart” up some small organza bags for her festive table, she wanted some way of putting names on them …. at first I was stumped …. then I “wondered” about making some brads ….. I chose the biggest brads for the bags, punched out the circles and hand wrote the names, then very carefully put the plastic domed sticker over it, a dab of glue stuck them all together. However they looked a bit dull. 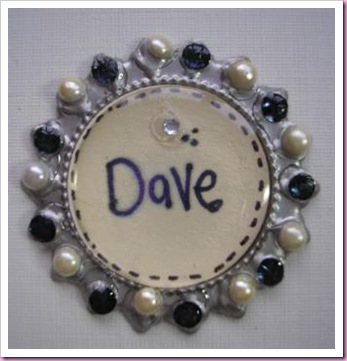 So I got out the Ranger Glossy Accents and stuck tiny pearls and black domed stickers round the edges of the brad and a tiny weeny clear flat backed gem just by the name.
But now the confession ….. I cut the brad fittings off as they didn’t hang right …. and stuck the “brad” on using my glue gun. 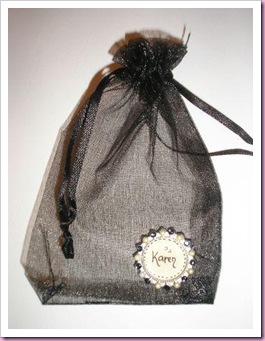 I know that I am a little behind at the moment with what’s new in the crafting world (since I gave up buying craft magazines and thus temptation) ….  but I understand that there is a new all singing, all dancing brad maker on the block called the I-Top from Imaginisce, which makes my set look positively prehistoric!

I am very partial to a sugared almond or two, in fact if they made a perfume that smelt exactly the same I would definitely wear it as my signature whiff of choice! 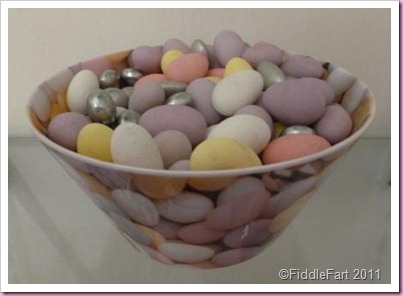 But why I am showing you this is you may be asking?  Well it’s to show you my sisters  attention to detail when she made up this Christmas present for me, she has only matched the almonds, including the silver ones to perfectly to the bowl, magic!!
Posted by Its All Fiddle Fart at Wednesday, January 04, 2012 3 comments: