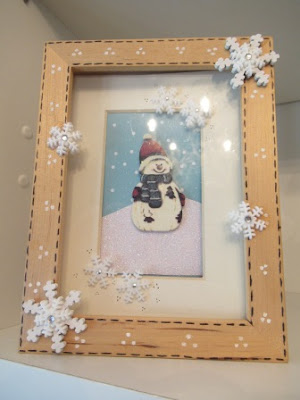 I found three rather awful looking, frames in a local charity shop for just 50p each, with their  crumbling glued flowers, but as the frames had a bit of depth to them and stood up on their own I thought they had potential, so they were duly purchased, with the worry that perhaps I might not be able to get the backs off in one piece without doing serious damage.  After very carefully prising I did manage it, it was the glue that was keeping the mount in place that presented the problems, but again with a little gentle  prising it too came free.  The frame was ready to embellish. 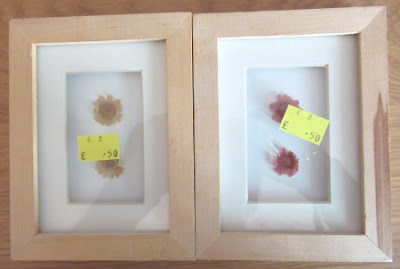 Unfortunately the snowman brooch I had originally planned on putting in the frame proved to be a little too thick and the frame couldn’t be sealed, however the painted wooden snowman fitted a treat, after adding a little white micro glitter to his hat band, pom pom and stripes on his scarf. 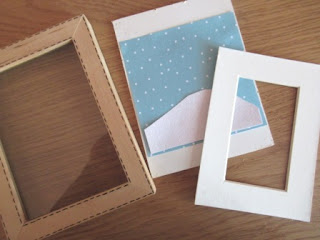 I made the very simple background using a snowy design paper and a scrap of white glitter card.  As I wanted to create several layers to make the most of the frames depth, I added two small snowflakes to two of the mount corners along with a few clusters of little doodled dots. With that, the frame was ready to be put back together. 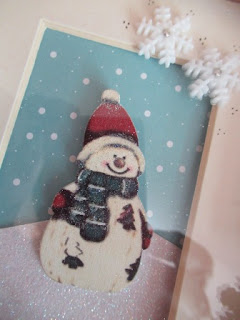 I added faux stitches using a black permanent fine liner pen around the edges of the frame, however when I come do the other frames I think I might use a white pen instead, the black is perhaps a little too harsh.  Two large wooden snowflakes along with a few more smaller ones complete the look. The white dots were added last using a white Posca pen.  Another Christmas fairing done and dusted.
Posted by Its All Fiddle Fart at Monday, June 17, 2019 3 comments: