This double sided tree ornament took far too much of my time for such a simple little thing. 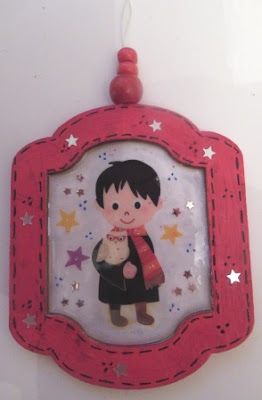 It all started when I found two of what looked very much like Harry Potter in a pack of Halloween stickers from Flying Tiger and decided to make Iris something to hang on the tree as she is Harry Potter Mad. 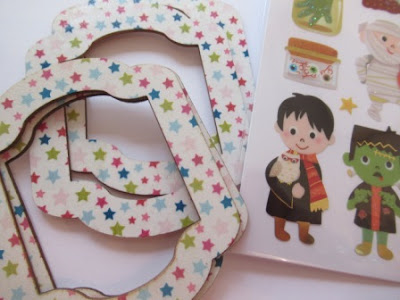 I simply stuck a sticker on each side of a piece of card and sandwiched it along with a looped thread to hang it, between two patterned wooden frames. Unfortunately, to my eye, the pattern on the frame looked too busy with the background I put behind the sticker so I coloured it over with a red Sharpie pen, but the patterned still showed through. 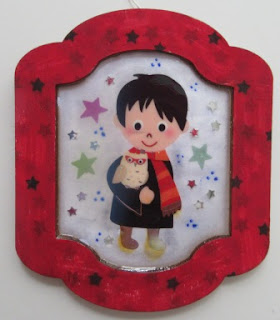 I couldn't start over again as I only had the two stickers, so instead I decided to paint over the red several times with white emulsion paint and then red again!!!  It took ages waiting for each layer to dry!  I really should have given up on it! 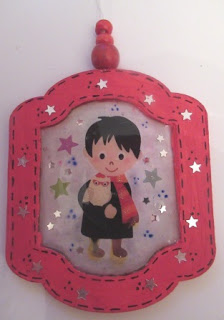 However, it looked pretty alright in the end and I felt able to fill the centre panels over with Ranger Glossy Accents to protect the stickers.  I then added tiny faux stitching on the inside and outside of the frame along with clusters of three dots using a black fine liner pen and  then a few tiny silver stars.

To hang it on the tree I managed to sneak a little flat necklace backing disc between the two stuck together frames, add a thread and three red, wooden beads.  Voila ...... but never again, a lot of lessons learnt!
Posted by Its All Fiddle Fart at Thursday, December 12, 2019 1 comment: