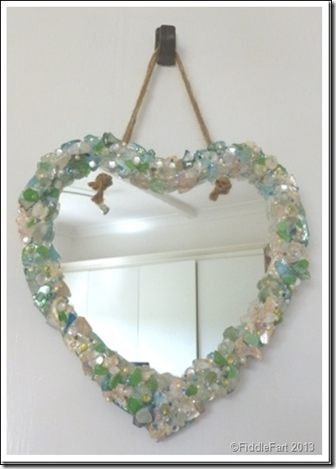 I have always been very proud of my “Favourite Blog of Dunelm Banner”, it felt very special to be “found” by a company not usually associated for their craft products ….. however,  it’s always been one of my favourite mooching grounds when looking for things to alter ….. and more recently, as I have been gradually “doing” Castle Greysquirrel up room by room,  the source for new curtains, bedding, lighting and several mirrors ….. 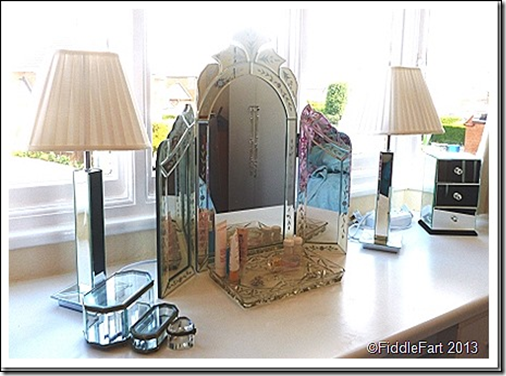 ………as my boudoir dressing table will confirm! …… The mirrored drawers and boxes (not from Dunelm) were gifts from Marc ….. who I blame for my ever growing ….. “London Style” !!!!!!!!!!!Sadly, in recent months,  because my blogging had not been as regular as it had been, I had lost touch with my contact Laura who is part the Dunelm  “blogging programme” …. but we are now back in touch ….. and as such on Friday, at the start of the Bank Holiday weekend I received a parcel …… 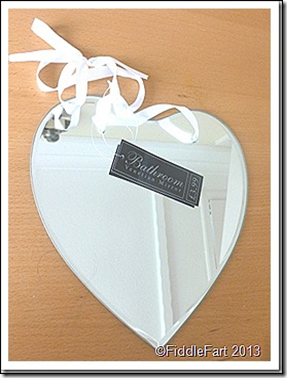 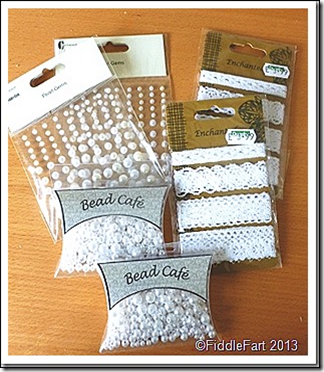 …… containing a mirror that I had had my eye on to alter and some very useful crafty bits and pieces…… THANK YOU LAURA. 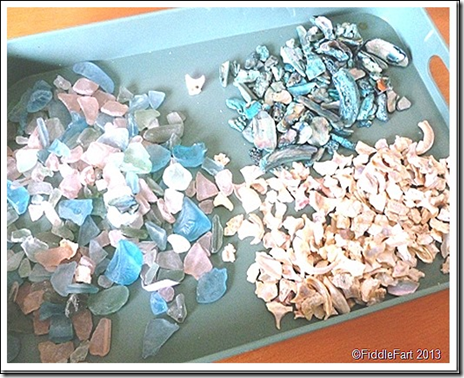 It’s hard to measure a heart, but the mirror is approximately 8.5ins at its widest and about 7.5ins tall, and a nice size to alter.  The vision in my head was to make something “magical” using the dyed broken abalone shells and sea glass I had bought a couple of years ago from Devon Driftwood Designs in Brixham http://www.devondriftwooddesigns.com/ and some of the sea glass I had collected from beaches from various holidays over the years. 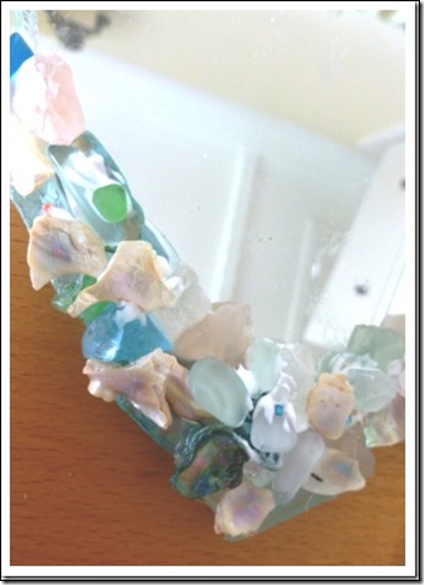 But, as with a lot of my ideas/projects in their early stages, after adding just one row of glass and shell round the edge of the mirror, using E6000 glue (as recommended by Marc) I was unhappy with the results.   I added a few pearls,  but it just looked bitty and uncoordinated, if that makes sense, so in the end I decided to stop fiddle-farting and to go back to it on Saturday morning.…. And in the morning my fresh eyes told me that I needed to make the edge wider by adding another row of bigger pieces of glass/shell and then build up that bottom layer with smaller pieces….. at the same time changing to Crafter’s Pick The Ultimate glue …. 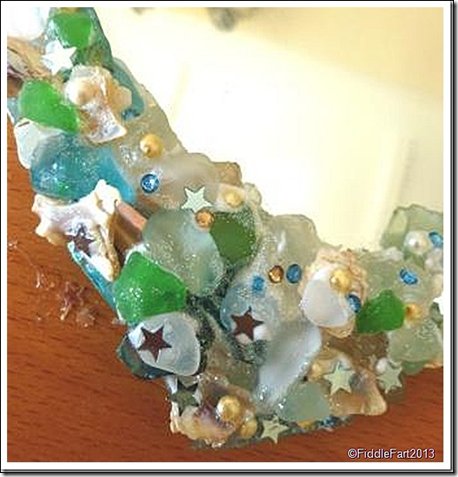 ……….. which is rather like an extra thick PVA that stick all sorts of things including glass/metal/ceramics and importantly dries clear ….. It’s a glue I don’t have much experience with and so just had to keep my fingers crossed that it did what it says on the bottle ….. as my gluing always tends to be on the thick, blobby side …… as these pictures contest! 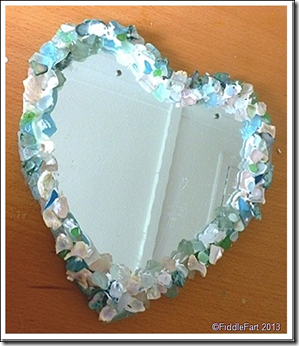 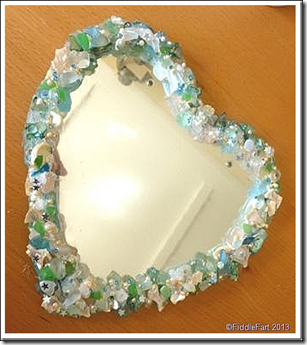 As the layers built up ….. it was started to come together more, but was lacking on the magical look ….. so I started to added a few flat back pearls, and pale blue and beige gems …. and a few pale blue stars …… and then I had to pull myself away again …. to wait for the glue to dry clear ….. because this time I was afraid I was in danger of over egging the pudding!!!
On returning to the mirror once more the stars were removed, but more pieces of glass were added and lots more fiddling and twiddling …. as I just couldn’t seem to get it looking “pretty” enough …… in the end I added blobs of glue and poured tiny iridescent beads all over it (to look like underwater bubbles) ….. and then knew I had to stop or it would have ended up being consigned to the bin ….. I brushed over it to removed the excess of beads …. and that was it!!  The last thing to do was thread three strands of soft string through the holes and to hang it ……. on my craft room door
Posted by Its All Fiddle Fart at Monday, May 06, 2013 9 comments: