Hmmmmm, not too sure about this one, at the moment …….
When my father-in-laws house was being cleared to sell last year, I asked if I could have the oval mirror that had hung in the dining room forever, it had no value, but I hoped that in time I could breath new life into it, so that it could continue live on, all be it in a different guise, hopefully somewhere in my new home. 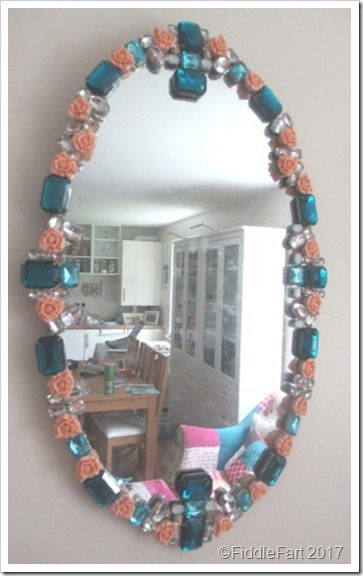 The mirror measures approximately 58cms at its tallest  and 36cms at its widest . 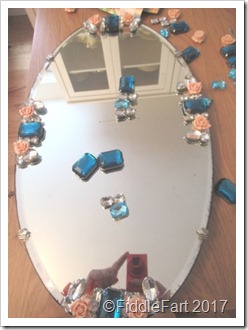 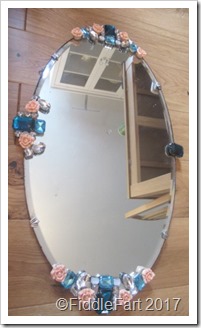 With the mirrors I have bejewelled in the past I have been fairly random in my placing of the jewels, but this time, because of the shape, lack of frame and the type of jewels I was much more disciplined, trying to keep things as symmetrical as I could.  I am not sure if that’s really me though! 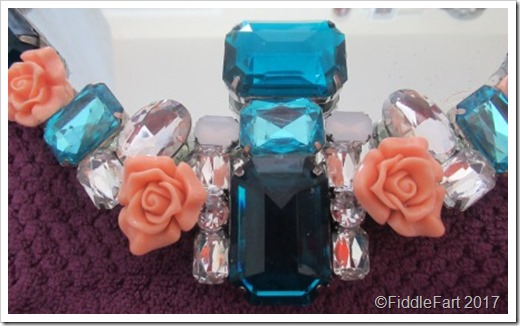 The roses were taken from four Poundland bracelets and the other gems taken from charity shop finds, costing no more than five pounds in total.

I started at the top, then the bottom, trying to “mirror” the pattern, then did the same again on the middle sections of the sides, filling the rest when I was happy,  but now looking at the finished results I wonder if it’s just a little too ordered, it seems to lack the character of my previous random mirrors. 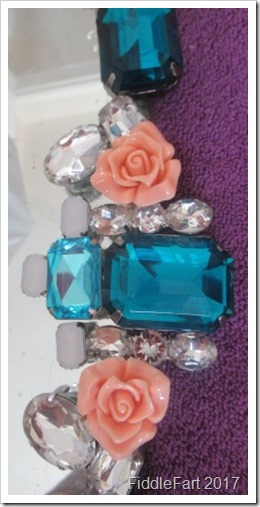 Although there are jewels all the way round, leaving no spaces, I have decided to put the mirror under wraps for a while, to be continued at a later date. I don’t think the edges are “encrusted” enough, but finding jewels that will fit in might take a little while, perhaps a trip to Primark might help. I think it might also need another colour or two, and perhaps a bit of layering, especially on the large turquoise gems.   It’s all a bit of trial and error, but I think I will get there in the end …… it just needs that added element of randomness.
Posted by Its All Fiddle Fart at Monday, August 07, 2017 2 comments: