My Mum and sister went to London for a short break a couple of weeks ago, and my mum very much wanted to go to The Foundling Museum.
http://www.foundlingmuseum.org.uk/  - “The Foundling Museum tells the story of the Foundling Hospital, London's first home for abandoned children and of three major figures in British history: its campaigning founder the philanthropist Thomas Coram, the artist William Hogarth and the composer George Frideric Handel.”
It was very moving for them both and hopefully when I go to London next I will be able to pay a visit myself.
Just before I went to see my Mum for Christmas my sister text me to say, “Take some of your ribbon to Mums, you’ll see why when you get there” 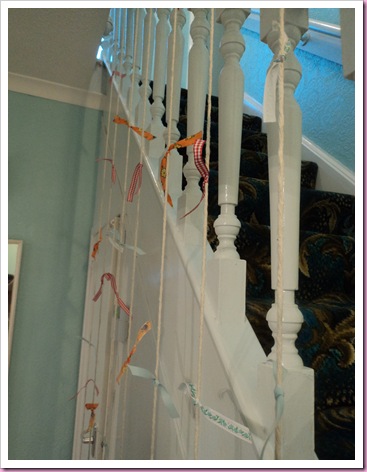 I am sorry that this picture just doesn’t do justice to what my mum had made …. but it was based on an exhibit at the museum  called The Falling Thread by Annabel Lewis. By adding my ribbons I feel another family Christmas tradition has been started. All  through the coming year I will be looking for small pieces of beautiful ribbon on my travels to add and perhaps make something similar in my home next year.
http://www.foundlingmuseum.org.uk/exhibit_temp.php 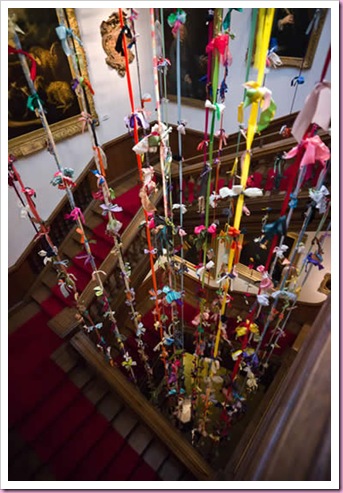 I’ve copied some of the information for the website, thinking about all those babies brings a big lump to my throat…….
Threads of Feeling  - 14 October 2010 - 6 March 2011

“Threads of Feeling will showcase fabrics never shown before to illustrate the moment of parting as mothers left their babies at the original Foundling Hospital, which continues today as the children’s charity Coram.
In the cases of more than 4,000 babies left between 1741 and 1760, a small object or token, usually a piece of fabric, was kept as an identifying record. The fabric was either provided by the mother or cut from the child’s clothing by the hospital's nurses.  Attached to registration forms and bound up into ledgers, these pieces of fabric form the largest collection of everyday textiles surviving in Britain from the 18th Century. 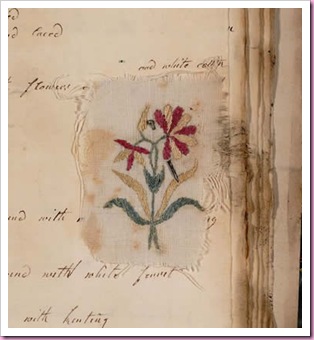 A selection of the textiles and the stories they tell us about individual babies, their mothers and their lives forms the focus of the Threads of Feeling exhibition. The exhibition will also examine artist William Hogarth’s depictions of the clothes, ribbons, embroidery and fabrics worn in the 18th Century as represented by the textile tokens.
John Styles Research Professor in History at the University of Hertfordshire received funding from the Arts and Humanities Research Council to curate the exhibition. John comments: “The process of giving over a baby to the hospital was anonymous. It was a form of adoption, whereby the hospital became the infant’s parent and its previous identity was effaced. The mother’s name was not recorded, but many left personal notes or letters exhorting the hospital to care for their child. Occasionally children were reclaimed. The pieces of fabric in the ledgers were kept, with the expectation that they could be used to identify the child if it was returned to its mother. 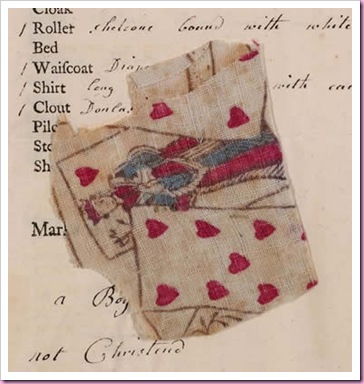 The textiles are both beautiful and poignant, embedded in a rich social history. Each swatch reflects the life of a single infant child. But the textiles also tell us about the clothes their mothers wore, because baby clothes were usually made up from worn-out adult clothing. The fabrics reveal how working women struggled to be fashionable in the 18th Century.”
Posted by Its All Fiddle Fart at Wednesday, December 29, 2010

All the years I've lived near or worked in London and I have never been to the Foundling Museum. Something to put on my list of places to go during 2011.

what a wonderful way to display history! I would live to vist the exhibition and maybe start a collection of my own with my children. thank you for sharing this x

HEard about those ribbons on a geneaolgy program on radio 4 a few months ago. Someone was trying to trace their family tree and it led to the foundling museum. they brought out the exact piece of ribbon that had been left by the mother. I was sat outside my son's school in the car and had to take a ew momnets to pull myself together before I went in to collect him.
Thanks for all your inspiration in 2010 Helen.
HAppy New Year!