Hmmmmm, remember all my best laid plans for my first 2019 Advent Calendar last week, well, they’ve not gone as well as I hoped, but at least I have got two drawers completed …….. and here be they! 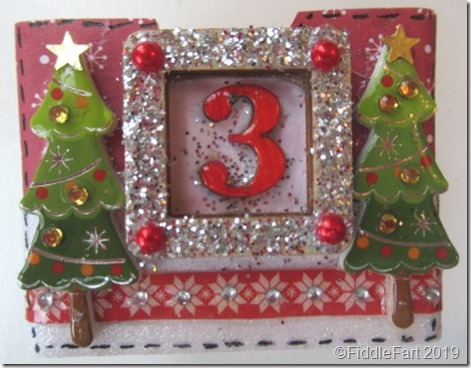 The first thing that went awry were the square frames I ordered from China, I found that they were really a bit too deep to attach the stickers I planned to use on to.  The stickers, are thick themselves and appear to be made of paper laid onto foam, but I don’t think they are robust enough to withstand little fingers over a period of time if used this way.  The thickness of the frame meant that if a sticker was attached to it there would quite a gap under the sticker and I could see it very quickly being bent and eventually torn, if all that makes any sense? So on this calendar at least, if I use the frames they will generally be in the middle of something like these two trees or too the side. 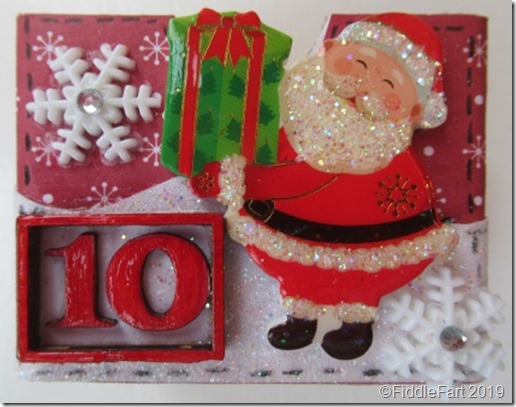 The next stumbling block was that most of the designs in the paper pad I also planned to use turned out to be a little too busy for the stickers and other embellishments,  the snowflake pattern on these two drawers was about the easiest on the eye I could use. The plan now is to stick to using just 5 papers, one on each line of drawers, the next three I make will be with this design and then I think I will have to swop the pad for other papers in my box.
Going back to the squares, I think I will be able to use them on another calendar with wooden embellishments as they should be much stronger, so they won’t go to waste.  I have also ordered some more frames from e-bay and just need to see how they work out when they arrive …….. if only The Works would start re-stocking the original frames I first started to work with ……. aghhhhh!

These first two drawers are a great success. They look very festive, and I love the sparkle!