Early on in the year, Marc’s partner Ian asked if I would be interested in helping him at the January Furniture Show at the NEC, to do a bit of running and help “dress” some of the stands he had designed……. Well, it would have been rude to say no wouldn’t it, despite my not having a clue as to whether I could actually “dress” a stand” or not! 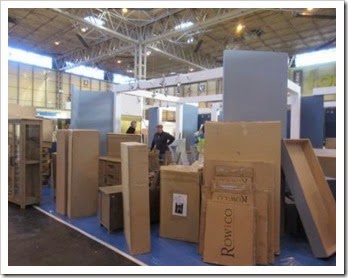 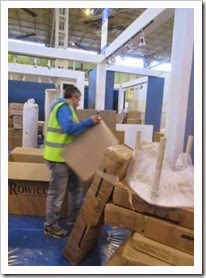 Let’s just say it was a HUGE learning curve!  I was nervous that I would be seen as a spare part that kept getting in the way or someone who just stood there without a clue, but I listened hard, double checking instructions if I didn’t quite understand first time and just tried my best! 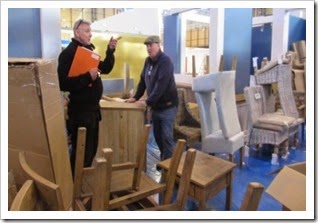 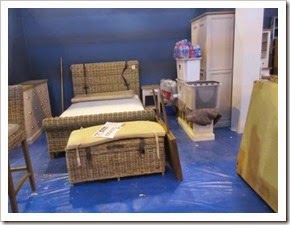 I wish I had taken more photos of the emerging stands, but let’s say by the second day I was just too busy!  However, I hope I have captured the emergence of the Rowico stand (just one of four of Ian’s stands, not including the exhibition hospitality area!) 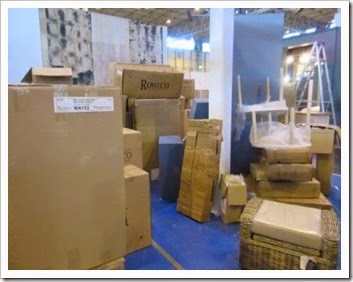 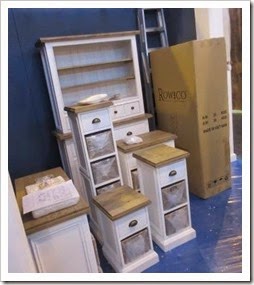 When we arrived, the stand had been built and painted, lighting in position and carpet laid (but carefully covered) all exactly to Ian’s design. All the furniture arrived in boxes, that needed unpacking and putting together …… and then putting in the correct position……. 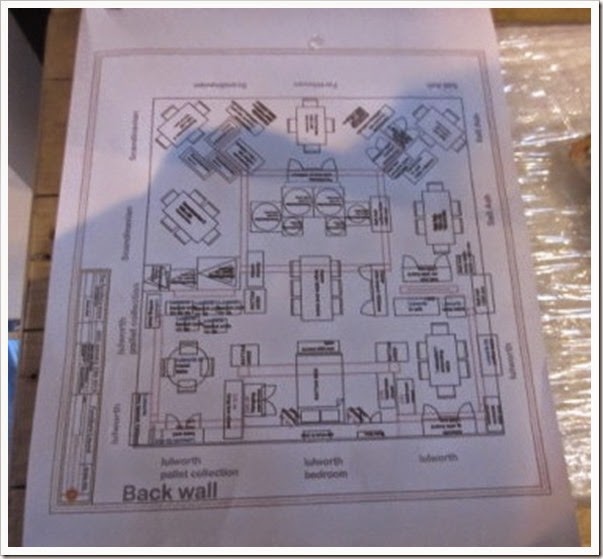 ……. all again exactly to Ian’s plan, everything and I mean everything was meticulously planned and put together. 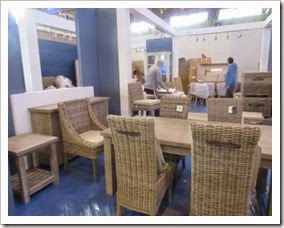 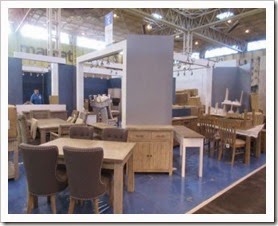 The next morning, we arrived and the stand was beginning to take shape.  It was then my turn to wipe everything down …… 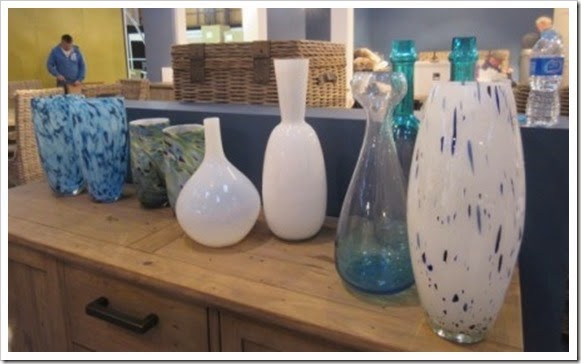 …….. and then try to place the pieces that Ian has sourced, all quite large and manly in different shades of blue and white, and in pairs or sets of three. 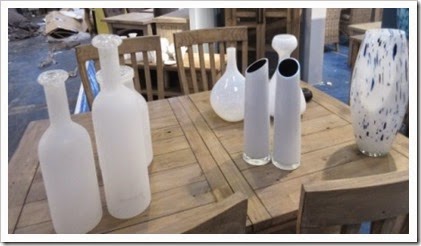 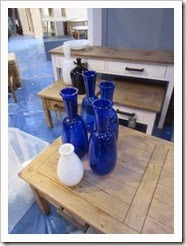 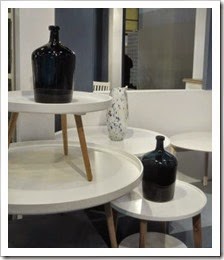 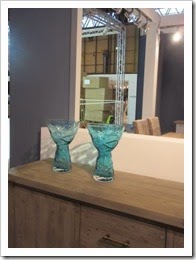 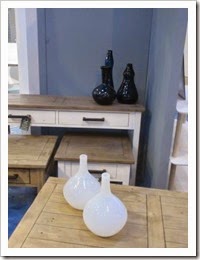 …… but believe me, it’s not as easy as the expert dressers make it look!!! 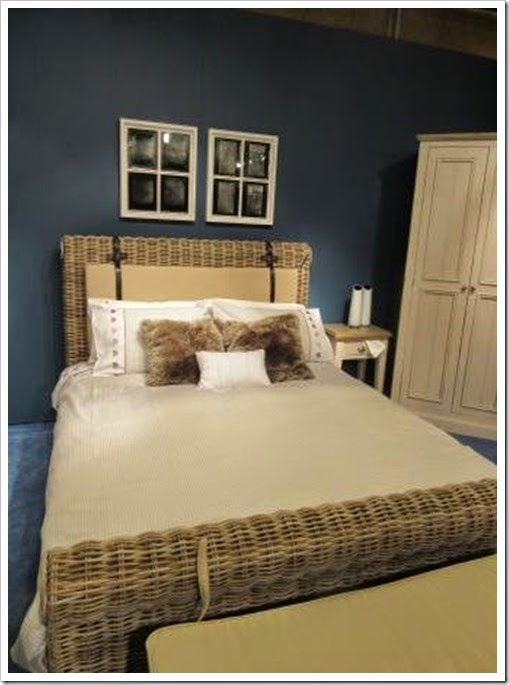 I also got to dress my first exhibition bed …….. believe me, if it took me as long to make one bed to exhibition standards at home,  I would never ever leave the bedroom!!!!  Once the stand was dressed, fresh the flowers and plants were added at the very last minute. 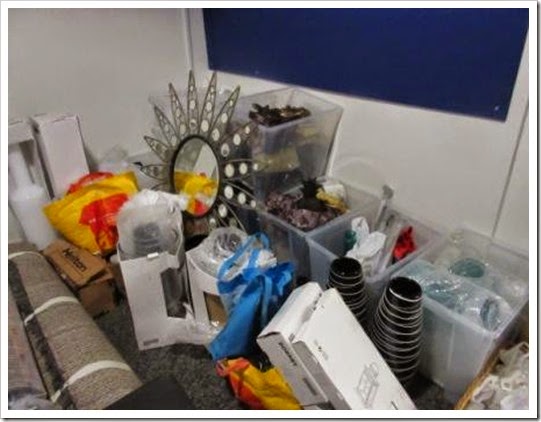 Ian was lucky to have “an office” at the NEC where he could store his props and where his sister Lynn and I could put together what seemed like 100’s of the Ikea occasional tables that were going to be used in the exhibition hospitality area. 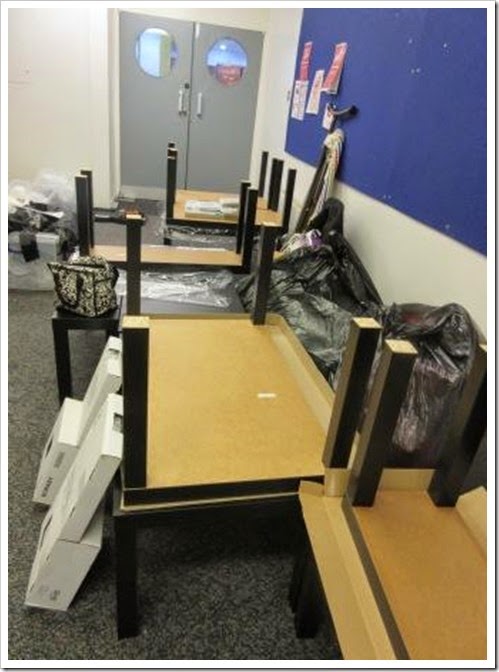 ……. and I faced my demons …..  by putting together a couple of Ikea lamps that I had not bought a few months earlier for myself because they looked too difficult to put together ….. as this was business, I had to put them together!!!! 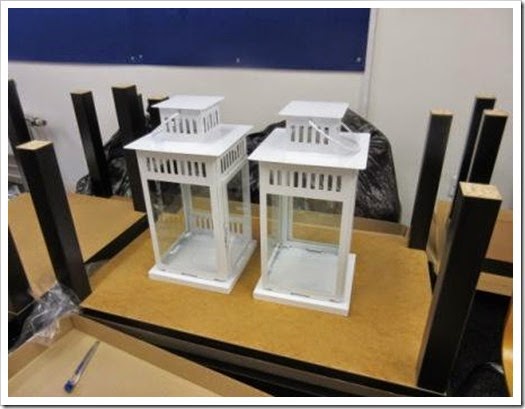 I wish I had seen the hospitality area completed ….. it was going to be a spectacular Palm Court, but it was still in it’s infancy when I had to leave. 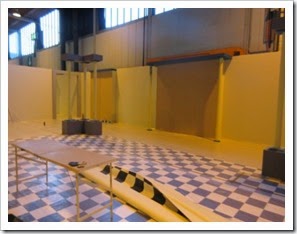 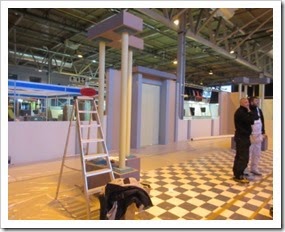 I learnt so much and will now look at exhibitions with a whole new eye.  And, I did so much walking, from one side of the hall to the other, finding my way through a gigantic maze, time after time, but which seemed to change each time I went through as the stands took shape. 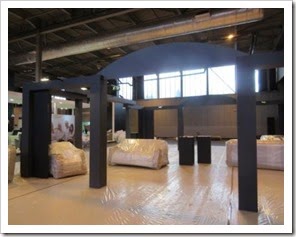 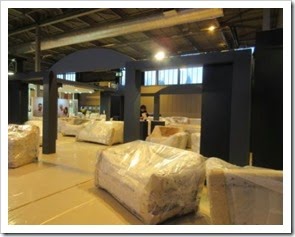 I got lost so many times while getting the coffee you wouldn’t believe!  At times we all got very cold (hence the coffee runs), as they don’t put the heating on until the last minute, but I wouldn’t have missed it for the world. It’s certainly not glamorous, it’s very hard work but a wonderful experience and a glimpse into a completely different world from working in a school!!!! 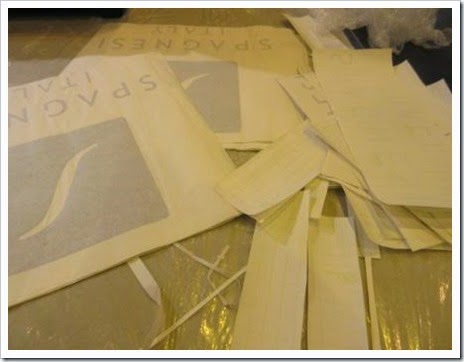 ………And where you need to think on your feet., like when the decals don’t stick to the stand walls. You need to keep you clients happy as this is their showcase and when it all boils down to it, their livelihood, they need to sell their goods.  I am hoping that once I am a “free woman” Ian will ask me to help again ….. I just need to go into training about three months before the event.
Posted by Its All Fiddle Fart at Monday, April 27, 2015

This looks like an amazing experience! Thanks so much for sharing all the photos and details of your time with Ian. You've helped me to understand there is a lot more work in these displays than one would think.

Hi Helen. It's good to hear that you (mostly)enjoyed your first exhibition build. You did a great job on placing the finishing touches.
As a retired sign designer/manufacturer/fitters wife and help mate we have had to do many stands at the NEC, both our own and for other companies and can vouch for the less than warm temperature, (think brass monkies!) we did have several secret goodies for fixing the graphics to the stands though, well, we should have done shouldn't we being in the sign business !
I do hope that you get to see some photos of the completed stands after all of your hard work. This is yet another string to add to your bow : ) Take care.

Wow, a lot of hard work but looks like a lot of fun at the same time :)

There is absolutely no doubt you are a natural when it comes to an innate understanding of design and get it right every time ....thought this area of design was your element when you got to do the show at the store..... really love that bedroom; so happy to know you had this opportunity....Dianne