This hand cut card measures 5.5ins x 5.5ins.
I love the wooden frames sold not only in Hobbycraft, but also in The Works and Poundland etc.  I am just at a bit of a loss as to how to use them on a card. My imagination goes no further than simply framing a sentiment/greeting or creating a little scene and although that’s a little boring, despite extensive searches on Pinterest and Google I haven’t found any other ideas that inspire me ….. so I am still working on it…… 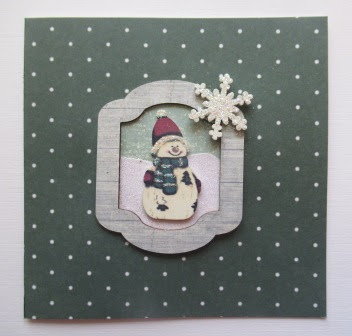 However, having said that I am really pleased with this snowman card. The grey wood effect frame was the starting point, followed by the wooden snowman on a glitter card snow background. The snowman was from Lldl a couple of Christmas’s ago and I really wish they would stock them again.  I bought so many, but I am now down to my last few. 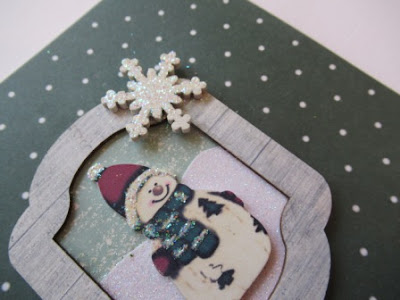 It was finding the right paper to cover the front of the card that took almost all of my time, but I think I got there in the end.  The wooden snowflake and the extra dusting of glitter on the snowman’s scarf and hat were the last things to go on.  I think the card could take a little more fiddle fart, but for the time being I’ll just leave it as it is.
Posted by Its All Fiddle Fart at Monday, February 18, 2019

You definitely got it just right! The background paper is perfect, and your snowman scene is fun and festive. I like your extra touch of glitter, too.

I really like this but I would be tempted to put just a few tiny clear gems on the backing paper for a bit of sparkle. Karen x